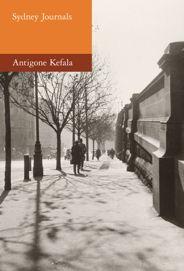 Written from her home in the Sydney suburb of Annandale over a period of thirty years, but ranging widely, to Broken Hill and Wilcannia, Paris, Venice, Prague and Athens, Kefala’s Sydney Journals portrays the intellectual milieu of the writer and her circle, many of them emigrés, a world sustained by conversation and friendship, and by reflection, on books and paintings, plays and films, and literary fortune.

At the same time the journals record, with a poet’s eye, the domestic and public life of the period, the changing seasons, the ageing of the writer and her companions, and the dramatic beauty of the city and its landscapes.

Antigone Kefala’s writing is remarkable for its clarity, intensity and austerity. Intimate in its recollections, social in nature, the Journals establishes her as one of Australia’s great diarists.

Antigone Kefala has written four works of fiction, including The First Journey, The Island and Summer Visit, and four poetry collections, The Alien, Thirsty Weather, European Notebook and Absence: New and Selected Poems. Born in Romania of Greek parents, she lived in Greece and New Zealand before coming to Sydney.