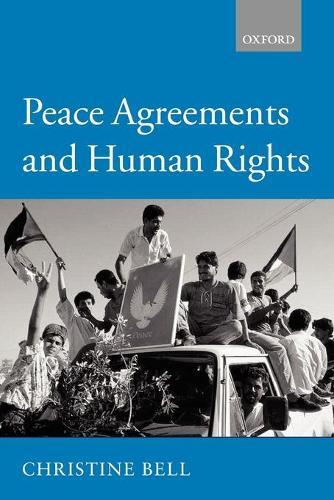 Peace Agreements and Human Rights examines the place of human rights in peace agreements against the backdrop of international legal provision. The book examines the role of peace agreements in peace processes, drawing on a comprehensive appendix of over 100 peace agreements signed after 1990, in over 40 countries. Four sets of peace agreements are then examined in details, those of Bosnia Herzigovnia, Northern Ireland, South Africa and the Israeli/palestinian conflict. The Human Rights component of each of these agreements are comapred with each othe- focussing not on direct institutional comparison, but rather on the set of trade-offs which comprise the ‘human rights dimension’ of the agreements. This human rights dimension is also compared with relevant international law. The book focusses on the comparison of three main areas: self-determination and ‘the deal’, institution-building for the future, and dealing with the past.

The author argues that the design and implementation prospects are closely circumscribed by the self-determination ‘deal’ at the heart of the agreement. She suggests that the entangling issues of group access to power with individual rights provision indicates the extent to which peace-making is a constitution-making project. She argues in conclusion that peace agreements are in effect types of constitution, with valuable lessons about the role of law in social change in both violent conflict and more peaceful contexts.