Excitable Speech: A Politics of the Performative 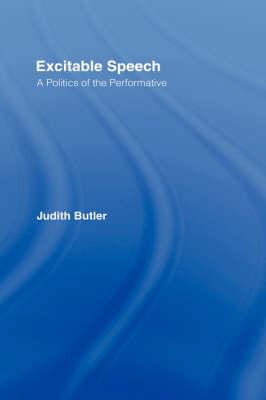 Excitable Speech: A Politics of the Performative

With the same intellectual courage with which she addressed issues of gender in two earlier best-selling Routledge books, Gender Trouble and Bodies That Matter , philosopher Judith Butler turns her attention to speech and conduct in contemporary political life, looking at several efforts to target speech as conduct that has become subject to political debate and regulation. Reviewing hate speech regulations, anti-pornography arguments, and recent controversies about gay self-declaration in the military, Judith Butler asks whether and how language acts in each of these cultural sites. Excitable Speech examines the issue of the threatening action of words. The book suggests that although language is a kind of performance which has the power to produce political effects and injuries, it is best understood as a scene of injury rather than its cause. Rather, Butler warns us againts a ‘sovereign’ view of language, in which the words we speak are construed as unequivocal forms of conduct. She shows that the repetition of injurious language can be the occasion of its redefinition. Negotiating the work of Austin, Derrida and Bourdieu, she offers a theory of the political performativity of language. Butler illuminates the efficacy of injurious language, covering speech act therapy in both philosophical and literary traditions, Supreme Court cases, hate speech and pornography critics, and recent bans on gay speech in the military.