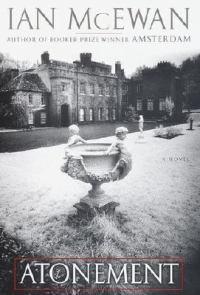 On the hottest day of the summer of 1935, thirteen-year-old Briony Tallis sees her older sister Cecilia strip off her clothes and plunge into the fountain in the garden of their country house. Watching Cecilia is their housekeeper’s son Robbie Turner, a childhood friend who, along with Briony’s sister, has recently graduated from Cambridge. By the end of that day the lives of all three will have been changed forever. Robbie and Cecilia will have crossed a boundary they had never before dared to approach and will have become victims of the younger girls scheming imagination. And Briony will have committed a dreadful crime, the guilt from which will color her entire life. In each of his novels Ian McEwan has brilliantly drawn his reader into the intimate lives and situations of his characters. But never before has he worked with so large a canvas: In Atonement he takes the reader from a manor house in England in 1935 to the retreat from Dunkirk in 1941; from the London’s World War II military hospitals to a reunion of the Tallis clan in 1999.