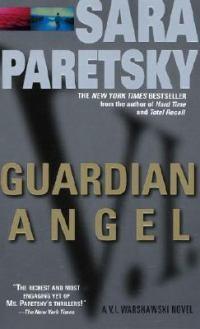 The best of the Warshawski novels! –Los Angeles Times Book Review Underneath V. I. Warshawski’s wisecracking P.I. exterior lies a real pushover. When elderly neighbor Mr. Contreras asks her to look into a fellow union retiree’s sudden disappearance, she says yes from her heart, not her head. And when a crotchety eighty-year-old dog owner starts wrangling with a Yuppie-Come-Lately couple on their blue-collar street, again, it’s V.I. to the rescue. Only it all goes to hell in a handbasket when Mr. Yuppie turns out to be a lawyer in V.I.’s ex-husband’s law firm, and the missing retiree turns up floating facedown in a canal. And now V.I.’s strapping on her shoulder holster to snoop into Chicago’s labor unions and politicos, because being on the side of the angels won’t win her any halos… but it’s the perfect place for an encounter with violent death. Praise for Guardian Angel A fast-paced, complicated mystery… the real joy of Guardian Angel is Paretsky’s smooth pen and continuing cast of characters. –New York Daily News No one, male or female, writes better P.I. books than Paretsky, and Guardian Angel is the best to date! –The Denver Post One monster of a plot. –Booklist Some crime series grow stale over time, but there’s no sign of fatigue here. This is partly because the recurring characters continue to develop and engage the reader, and partly because of the moral intelligence that informs the writing. –Spectator