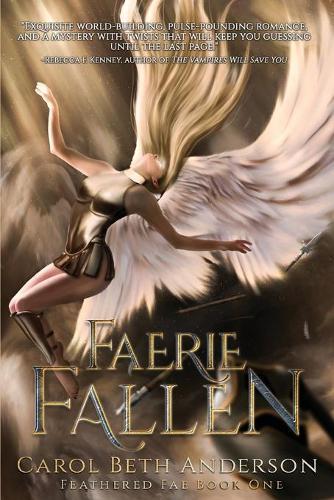 She looks like an angel … acts like a human … and must risk her life and heart to save the faerie realm. Sela is a young, feather-winged faerie, living a life of magical ease. Her fellow Fae portray themselves as benevolent gods, worthy of human allegiance. But Sela would rather carouse with mortals than rule them. When Sela gets caught illegally fraternizing with humans, her leaders cast her out of magical society, declaring her a fallen faerie. They command her to masquerade as a human and spy on the Darros, a family scheming to take down the Fae. If she helps stamp out the conspiracy, her exile will end. Sela agrees to tutor the Darros' son, Kovian, in the Fae language. When she arrives, she discovers Kovian isn’t a little boy. He’s eighteen. He’s gorgeous. And he despises faeries. Wearing her human glamour, Sela intends to charm him into revealing his family’s plot against the Fae. But she finds herself truly falling for him, while he pushes her away at every turn. Despite Kovian’s hostility, Sela is determined to earn his trust, learn his secrets, and save her people … if his family doesn’t discover her true identity and kill her first. If you like rich worldbuilding, unexpected twists, and slow-burn/enemies-to-lovers romance, then you’ll love Carol Beth Anderson’s Feathered Fae series. Buy Book 1, Faerie Fallen, now. — This romantic fantasy series is written for upper-YA and adult audiences. Expect some language and violence, plus sensual romance scenes with high emotions and mild heat. Perfect for fans of Elise Kova and Holly Black. Content Advisory: Faerie Fallen contains depictions of self-harm, an instance of attempted assault in the form of an interrupted unwanted kiss, and various types of non-sexual violence, including sadism, masochism, and harm to an infant (briefly described).