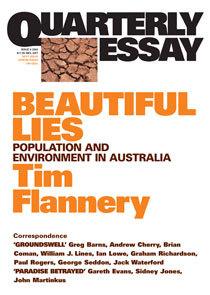 The lie of terra nullius that made us ignore the Aborigines' knowledge of the environment. The lie of the Snowy Mountains Scheme that did untold damage to our river system for the sake of white immigration. The lie that rushing to preserve wilderness will save endangered species. Tim Flannery is also skeptical about the myths of multiculturalism, and he argues that we cannot sustain a larger population given our resources. In his conclusion, he asks how we can discharge our responsibility to the refugees who are the victims of American policies we collude with. ‘This essay is written as a thundering no to the characteristic Australian assumption that 'She’ll be right’ … This is a Quarterly Essay written in the passionate belief that we need a coherent policy on population … If we do not have one, we will never be in a position to do justice to … the dispossessed people of the earth; indeed our children’s children will … think we have dishonoured their birthright.‘ -Peter Craven, Introduction 'The refusal to ratify the Kyoto Protocol will almost certainly, in time, be remembered as the greatest failure of the Howard government - Tampa, detention camps and Iraq notwithstanding.’ -Tim Flannery, Beautiful Lies