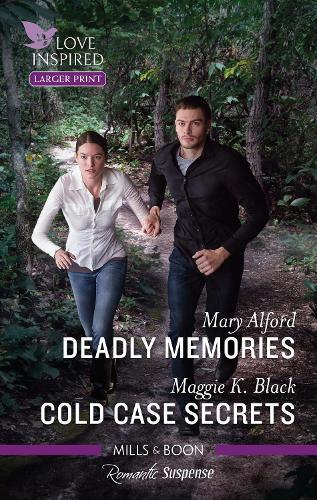 Deadly Memories - Mary Alford Woman without a past… Amnesia may be keeping Ella Weiss from remembering her past - but not from saving the little boy who’s been her fellow prisoner the last seven years. Managing to escape her cell, all she wants is to find where little Joseph is being kept. Instead she runs straight into CIA agent Kyle Jennings. Kyle isn’t sure if Ella is actually a kidnap victim or if she’s working for the gun-runner he’s been after. One thing he is certain of, is her uncanny resemblance to the wife he thought he’d buried. To save a child’s life and stop a terrorist from slipping through his fingers, he’ll need to uncover the secrets of Ella’s past - and whether or not she’s really the woman he’s never stopped loving. Cold Case Secrets - Maggie K. Black The Canadian wilderness can be deadly… Solving his sister’s murder is Mountie Jacob Henry’s only priority - until his daring helicopter rescue of Grace Finch leaves them stranded in the Canadian wilderness. Now with a storm raging and escaped convicts in pursuit, Jacob and Grace must rely on each other for survival. But when Jacob discovers Grace’s deadly secret, can he look past it in the fight for their lives?