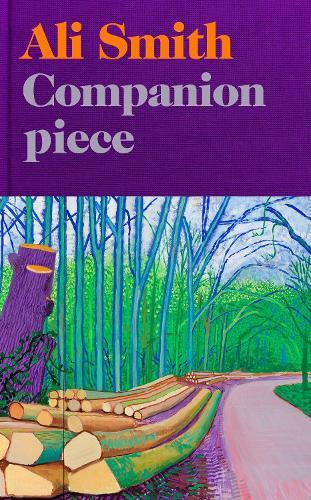 A celebration of companionship in all its timeless and contemporary, legendary and unpindownable, spellbinding and shapeshifting forms…
It follows the unique achievement of her Seasonal cycle of novels - Autumn, Winter, Spring and Summer - written and published in as close as possible to real time, between 2016 and 2020, absorbing and refracting the times we are living through: the ‘state-of-the-nation novels which understand that the nation is you, is me, is all of us’ (New Statesman).
‘Ali Smith is lighting us a path out of the nightmarish now’ - Observer

Ali Smith’s Seasonal Quartet, her series of subtly interconnected state-of-the-nation novels, was among the most ambitious and impressive fictional projects of recent years. When taken together the novels had a grandness – not just in scale and structural beauty, but in their emotional power as well. And now, just shy of two years after Summer brought the quartet to a close, we have its follow-up Companion Piece.

Despite what its title and Hockney adorned front cover may suggest, this new novel isn’t connected to the quartet in any literal sense. What it does share with the quartet is a timeliness in its portrayal of the UK’s catastrophic political goings-on. When the book opens, Sandy Gray, a visual artist with a deep love of language, is ‘way past caring’. With the pandemic raging on, swathes of the nation pretending it isn’t, and Sandy’s father under close observation in hospital following a heart attack, Sandy is slipping into numbness and apathy. That is until an acquaintance from her college years reaches out with a cryptic message for her to interpret. This unforeseen encounter enlivens Sandy’s routine, setting in motion a series of events that often hover between reality and dreams.

In her 2012 book Artful, Smith reflects that ‘books need time to dawn on us’, for us to ‘understand what makes them, structurally, in thematic resonance, in afterthought’. There are few writers whose work exemplifies this more acutely than Smith herself. Companion Piece is no exception, suffused as it is with motifs that subtly shift and gather weight as the book unfolds. With its playful sense of language’s possibilities and its experimental edge, this new novel explores the potentially transformative power that connection can hold. And while it may not reach the heights of Smith’s best work, to read (and re-read) Companion Piece is to be enlivened along with its protagonist.

Jack Rowland is a bookseller at Readings online.