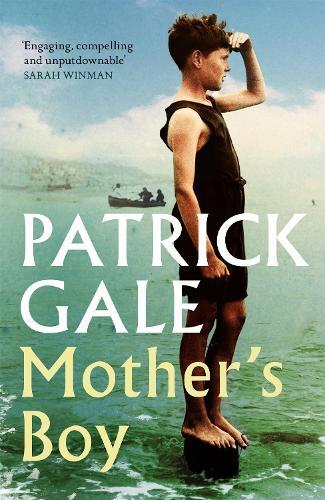 Laura, an impoverished Cornish girl, meets her husband when they are both in service in Teignmouth in 1916. They have a baby, Charles, but Laura’s husband returns home from the trenches a damaged man, already ill with the tuberculosis that will soon leave her a widow. In a small, class-obsessed town she raises her boy alone, working as a laundress, and gradually becomes aware that he is some kind of genius.

As an intensely private young man, Charles signs up for the navy with the new rank of coder. His escape from the tight, gossipy confines of Launceston to the colour and violence of war sees him blossom as he experiences not only the possibility of death, but the constant danger of a love that is as clandestine as his work.
Mother’s Boy is the story of a man who is among, yet apart from his fellows, in thrall to, yet at a distance from his own mother; a man being shaped for a long, remarkable and revered life spent hiding in plain sight. But it is equally the story of the dauntless mother who will continue to shield him long after the dangers of war are past.
‘One of the joys of Gale’s writing is how even the smallest of characters can appear fully formed, due to a charming wickedness alongside deeper observations’ - Irish Times

This beautiful novel opens with our protagonist, Charles Causley, working furiously onboard a Royal Navy ship in the control room, deciphering coded messages and relaying them to the captain of the ship during a naval battle.

The book then goes back in time and follows the life of Charles and his mother, who single-handedly raises him and is the centre of his entire life. To his mother, he is a prodigy and despite their strained finances, she buys a piano and indulges his every artistic endeavour. Through this family, we are treated to an intimate view of England from the 1920s to the 1960s.

Patrick Gale, the author of many books including the wonderful The Facts of Life, is a beguiling writer and there is an old-fashioned romance and structure in his words. Take for instance this description of Charles’ mother on her train ride home with her future husband: ‘Laura wouldn’t have said she was a nervous person but she was industrious; her mind had long been a little motor, always powering on to enumerate the next task and the one after that. As they took their seats in the third-class carriage again and an understanding look passed between them, though, she understood that motor had been stilled, and it was he who had gently stopped its motion, as you might stop a clock’s pendulum with one extended finger.’

There is a curious tension in this novel where the desires of Charles Causley are written with tremendous delicacy while the plot could be from a seething cauldron like Mildred Pierce or a Douglas Sirk melodrama from the 1950s. The reason for this becomes apparent when you read Gale’s afterword where he explains that the novel is based on the life of the real Charles Causley, a Cornish poet who indeed lived this life, but you feel Gale was so intent on keeping any prurience out of these pages that it sometimes feels like a lot happens behind closed doors.