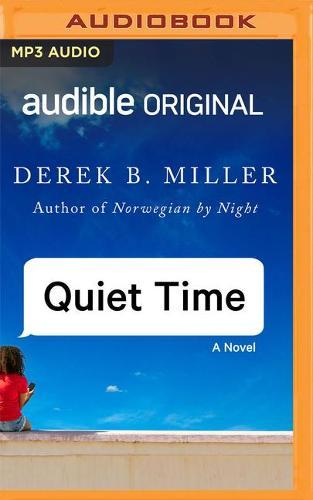 From the acclaimed author of Norwegian by Night and The Girl in Green comes the story of a family navigating the social media age. Robert and Mkiwa Livingston are happily ensconced in their tranquil life in Geneva, Switzerland, when Robert’s best friend, Gabriel, drops dead from a brain aneurysm, sparking a mid-life crisis. Nostalgic for the New England of his youth, Robert begs his wife for a chance to go back to his native America and the life he left behind. Mkiwa is certain that Robert’s yearnings are a recipe for disaster, but she reluctantly surrenders her job as a high-powered human rights lawyer, while their two daughters, Beatrice and Lindia, say good-bye to their circle of international friends and the only life they’ve ever known. As the Livingstons settle into their new home in Marblehead, Massachusetts, they - along with the rest of the country - become engrossed in a popular TV show called Quiet Time, about a family who decide to give up all electronic devices and smartphones for one year. The chatter at Marblehead High, normally trained on the show’s latest episode, switches abruptly to Beatrice when she’s caught on video deftly disarming a would-be gunman during an active shooter drill. She and her family soon find themselves at the center of a social media frenzy as real life and Quiet Time start to overlap and collide. When Lindia goes missing, the past and present - not to mention fiction and fact - become entangled and confused, forcing the Livingstons to pull together to restore both sanity and the family itself. At its heart, Quiet Time is a story about growing pains - in adolescence and mid-life - and what it means to be a family in a world that feels both hyper-connected and relentlessly alienating. At turns comedic, suspenseful, and poignant, Derek B. Miller pairs his immersive, signature storytelling gifts with Bahni Turpin’s singular voice to bring this astounding Audible Original to life.