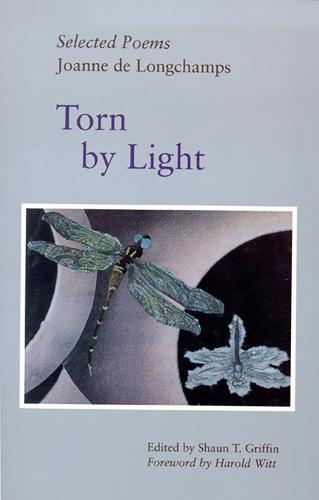 Torn by Light is a collection of Joanne de Longchamps’s poetry and collages to span her entire writing and artistic career. A gifted collage artist and published poet, de Longchamps is widely regarded as Nevada’s foremost poet of the 1960s and 1970s. Sadly, she died in isolation in 1983. She was quoted as saying, Nevada hardly knows me as a poet . In her lifetime, de Longchamps published poems in some of the country’s finest publications: Poetry , Prairie Schooner , The New York Times , Poetry Northwest , The Antioch Review , and American Scholar , among others. Torn by light includes poems from her seven published books, as well as selected poems from her unpublished manuscript, The Glass Hammer . Reproductions of the poet’s collages introduce each of the eight sections of Torn by Light , and the book contains a biography of the poet written by Shaun T. Griffin. De Longchamps’s work reflects a rare voice from the rural West. The fabric of her poetry and collages is woven from fascinating images from Greek mythology, science, the Aegean Sea, Nevada’s Pyramid Lake, and the West’s open spaces. Although she frequently acknowledged that Frost, Williams, Yeats, Hughes, and other male poets influenced her work, her voice ultimately resembles the poems of Sylvia Plath, Anne Sexton, and Vassar Miller. For researchers, students of literature, poets, and poetry lovers, this book aims to enhance the story of a compelling, precise, and dramatic voice that began in 1944 with the publication of her first chapbook, And Ever Venus .