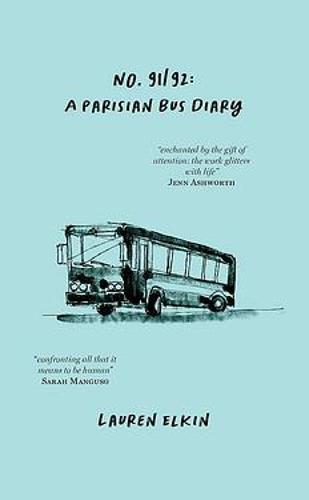 Your telephone is precious. It may be envied. We recommend vigilance when using it in public. - Paris bus public notice
In Autumn 2014, Lauren Elkin began keeping a diary of her bus commutes in the Notes app on her iPhone 5c, using it to take in the world around her. During that year, the Charlie Hebdo attacks occurred and Lauren had an ectopic pregnancy, requiring emergency surgery. At that point, her diary of dailiness became a study of how we digest major events personally and collectively as a city, observed from the height of the bus.

No. 91/92 is a love letter to Paris and a meditation on how it has changed in the two decades the author has lived there. It’s a celebration of community and a time when we could all observe each other in our fleshy up-closeness.
$22.99Add to basket ›