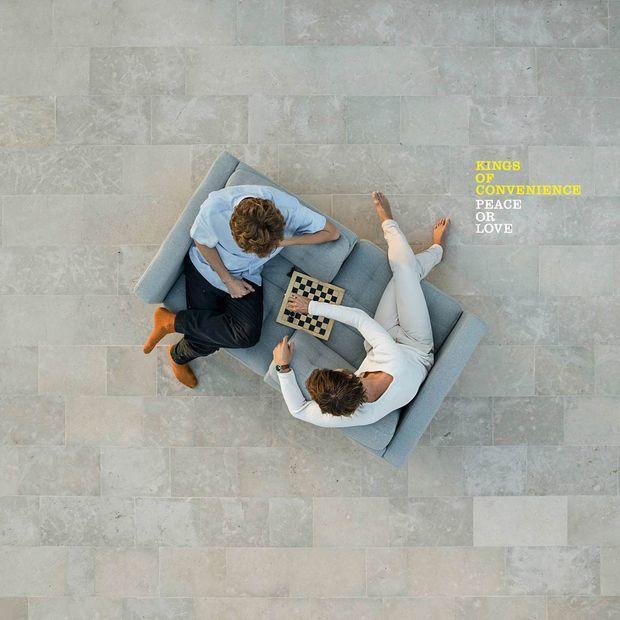 Indie-pop duo Kings of Convenience return with their first new music in 12 years.
The gentle power of ‘Rocky Trail’, the first single to be released, makes it clear that the band has retained their unique songwriting talent and emotional eloquence since they last recorded together. The haunting acoustic melodies are accompanied by violin and the pair’s distinctive dual-vocal approach to create something both subtle yet instantly familiar. The contemplative lyrics touch on themes both universal and personal, ideas of perception and regret. “Another classic Eirik [Glambek Bøe] composition that skillfully ignores the verse-chorus-verse blueprint” explains Erlend [Øye] on the origins of the song. “It’s pop music, but not as we know it.”
Peace or Love is the sound of two old friends exploring the latest phase of their lives together and finding new ways to capture that elusive magic they’ve so artfully retained over the years. The album was recorded across five years in five different cities, and the album is perfect for the transition from spring to summer: 11 songs about life and love with the alluring beauty, purity, and emotional clarity that fans of the band have come to know and love.
Eirik Glambeck BoE and Erlend Oye met at school in Bergen, Norway and first performed together in the rock band Skog before breaking off and forming a duo in 1999. The pair established themselves as inadvertent trailblazers of a new wave of intimate, acoustic music. They’ve released three critically acclaimed albums, which have helped them cultivate a dedicated fanbase-albeit one that is more than ready for some new music from Kings of Convenience. The wait is finally over.
$64.99Add to basket ›