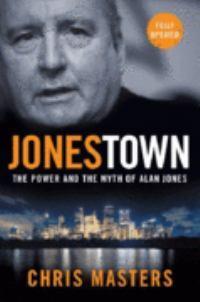 ‘Tough and impassioned this is a finely written and sparkling book.’ Bridget Griffen-Foley, The Sydney Morning Herald ‘Masters unveils a richly detailed and surprisingly rounded portrait of Jones. The account of how Jones wields and abuses his power as a broadcaster makes for profoundly disturbing reading.’ Matthew Ricketson, The Age How do we rank a man who raises millions for people in need but whose actions waste millions in support of unworthy mates and poor public policy? How do we define someone who on his own finds jobs for the out of work but who routinely trashes the careers of others? These are some of the many paradoxes of Alan Jones. Why is he adored? Why is he reviled? Why does this talk radio host have the power to dine with presidents, lecture prime ministers and premiers, and influence government ministers? And how is it that he could not only survive such a scandal as the ‘cash for comment’ affair, but go on to greater reward? Chris Masters seeks the answers to these questions and in doing so reveals a complex individual and the potent relationship he has with both Struggle Street and the big end of town. Compelling and probing, Jonestown takes us to the hazardous intersection of populism and politics. It reaches deep into a powerful industry and exposes the myth and the magic of a very powerful man.