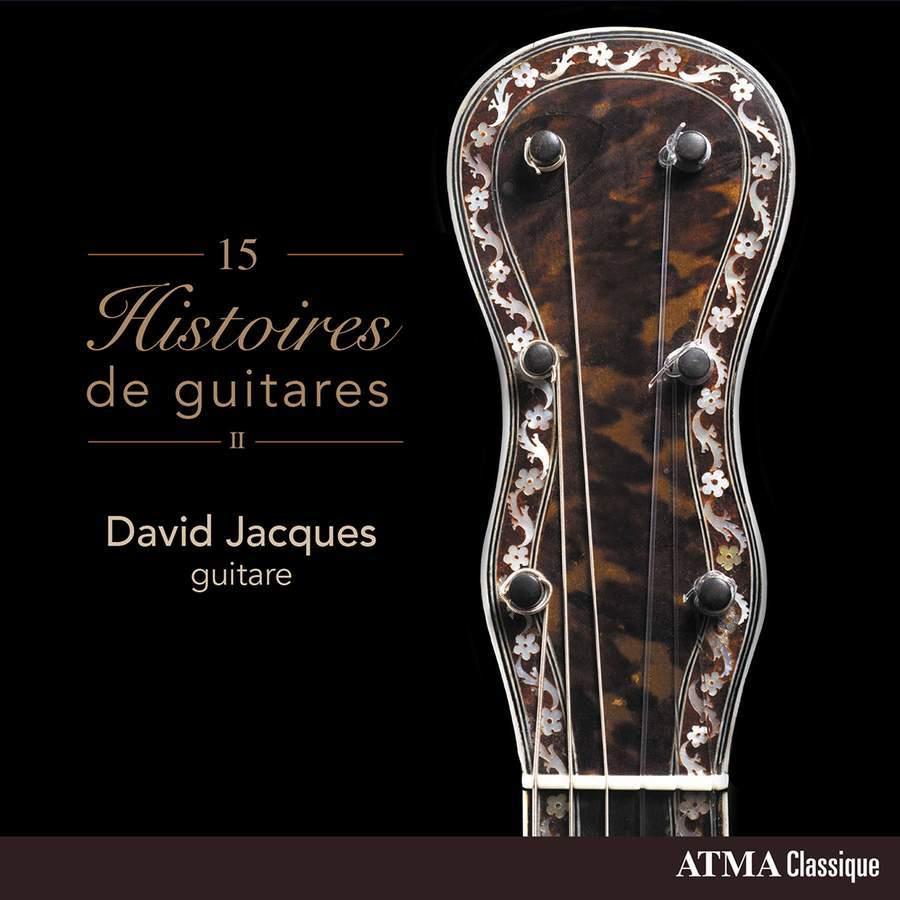 Guitarist David Jacques returns with a second volume of Histoires de Guitares (Guitar Stories), featuring 15 historical guitars from his private collection, most of them built by the best 19th century luthiers. Each guitar is featured in repertoire that suits the instrument’s character, and each has a story to tell.
15 Guitar Stories follows on the success of volume I, 14 Guitar Stories, released in January 2020 and nominated for a 2021 Opus Prize. In the early 1800s, the fruitful collaboration between composers and guitar-makers greatly enabled the instrument’s evolution, thanks to a variety of models, materials, and techniques. The guitar was considered the most fashionable instrument of the time, a must-have in 19th century music halls and European courts.
The rare guitars from Jacques' private collection hail from Naples, Turin, Paris, Mirecourt, London, Vienna, St. Petersburg, Madrid, and Seville the major cities where the finest guitars were crafted for outstanding musicians.
Guitarist and lutenist David Jacques has a Ph.D. in early music performance from the Universite de Montreal. His discography consists of 50-plus recordings on the XXI-21, ATMA, Oz, and Analekta labels, several of which have been nominated for ADISQ, JUNO, Opus, and ECHO Classik prizes.

This is the second recording by Canadian classical guitarist David Jacques to feature on these pages. The previous recording, 14 Histoires de Guitares, featured guitars and music that spanned more than three centuries. This new recording features guitars that are from the 19th century and are all from Jacques’s private collection.

There are pieces by familiar names such as Fernando Sor, Ferdinando Carulli and Paganini, but the most interesting thing for me was that Jacques performs a variety of pieces from composers who are not really that well-known, unless you have studied or played classical guitar. I was not familiar with names such as Vasily Sarenko, Ernest Shand, Christian Gottlieb Scheidler and William O. Bateman, but to me that is a bonus as it makes me – and hopefully others who purchase this album – want to seek out more works from these composers. This is a well thought out program and all pieces here are outstanding, but I have to mention the final track which did bring a smile to my face. It’s called ‘Joy-Boy’ by Albert J. Weidt and if you are a Seinfeld fan you will understand.

This is really a wonderful album from someone whose love of the guitar shines through, and Jacques’s skill and technique are on full display in all performances. I would recommend this recording to all lovers of music not just lovers of the guitar.

Phil Richards is a classical music specialist at Readings Carlton.