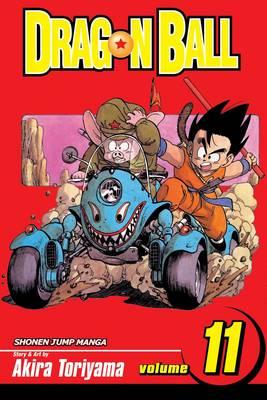 Eath’s greatest hero…is from outerspace! Dragon Ball introduces a young monkey-tailed boy named Goku (a wry update of the classic Chinese Monkey King legend), whose quiet life changes when he meets a girl named Bulma who is on a quest to collect seven Dragon Balls. If she gathers them all, an incredibly powerful dragon will appear and grant her one wish. But the precious orbs are scattered all over the world, and Bulma could use the help of a certain super-strong boy… (In Japan, Dragon Ball and Dragon Ball Z were originally a single 42-volume series. VIZ Media’s Dragon Ball contains vols. 1-16 of the original Japanese Dragon Ball, from the beginning of the series to the climax of Goku’s last fight with Piccolo.) The Tenka'ichi Budokai is heating up, and there can only be one winner! Last tournament’s champion Jackie Chun goes up against three-eyed Crane School kung fu master Tenshinhan! Then, it’s the long-awaited match between former classmates Goku and Kuririn–and guess who has some tricks up his sleeve! But Tenshinhan isn’t just fighting to win, he’s carrying out a deadly grudge–to avenge his master, the Crane Hermit, whose brother was killed by Goku. It all comes down to a final round so devastating the battlefield itself might not survive intact–let alone the spectators!