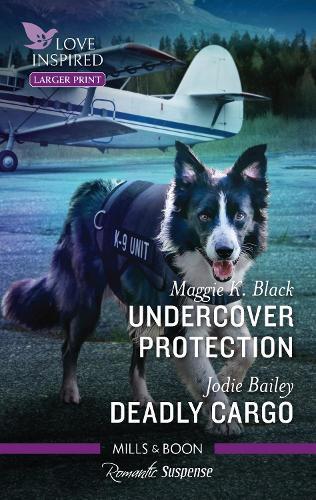 Undercover Protection - Maggie K. Black Something’s hidden on her family farm…and it could get her killed. When Leia Dukes is kidnapped at her family farm, the last person she expects to rescue her is the farmhand who broke her heart. With Leia’s life on the line, Jay Brock reveals his secret: he’s an undercover police officer hunting a serial killer - and there’s evidence in her childhood home. Jay might be Leia’s only hope of staying alive, but can she trust him again? Deadly Cargo - Jodie Bailey Secrets could turn deadly if an officer and his K-9 don’t uncover them. Following an anonymous tip, K-9 Trooper Will Stryker’s drug trafficking investigation has a new suspect - Jasmine Jefferson, an Alaskan bush pilot he’s convinced is hiding something. But when someone tries to kill them, Jasmine confesses she’s in witness protection. Now Will and his K-9 partner, Scout, must work with Jasmine to figure out if the attacks are related to his case…or if someone’s out for revenge.