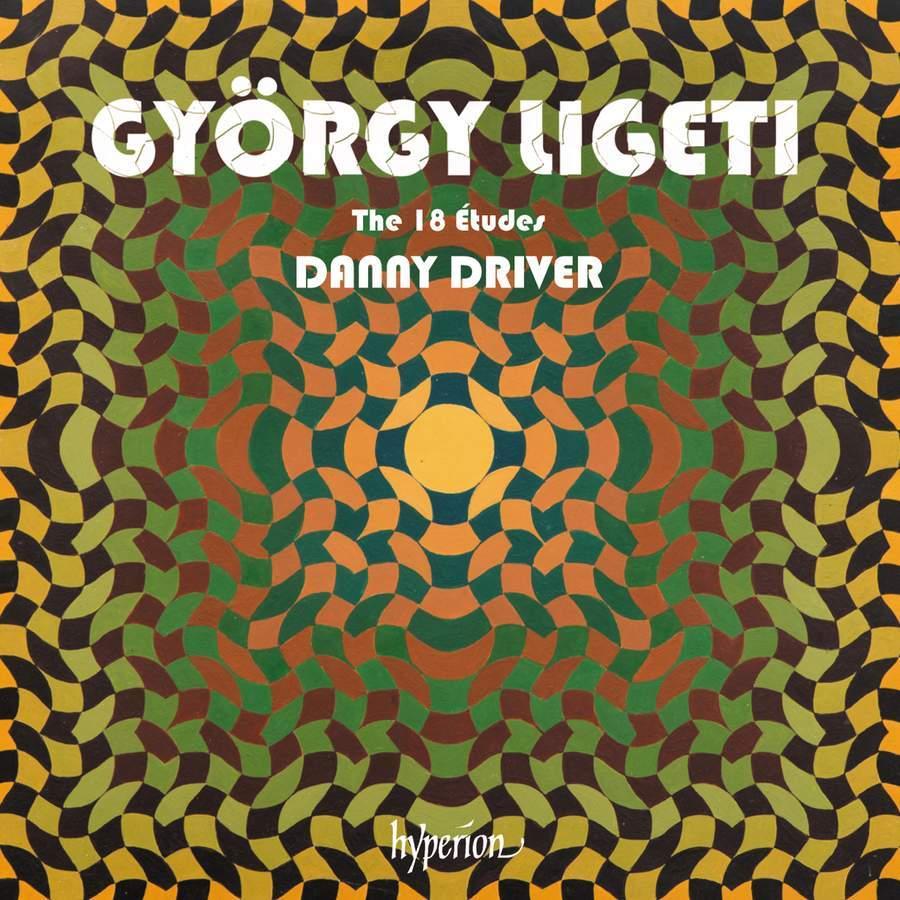 Composed during the 1980s and 1990s, Ligeti’s Études have already become modern classics, absorbing the attention of pianists, composers and contemporary-music audiences worldwide. They are as feared for the uncompromising severity and intransigence of their technical demands as they are celebrated for their musical ingenuity, striking originality, range and variety of feeling, accessibility to a wide listenership, and astonishing diversity of musical and non-musical inspirations and resonances.
Ligeti grew up during the politically turbulent 1920s and 1930s as an outsider-a Hungarian Jew in Romanian-speaking territories at a time of rife anti-Semitism. During the Nazi occupation of Hungary in 1944, he avoided deportation to concentration camps (most of his family did not survive), and later dramatically escaped from Hungary to Austria in late 1956, following the Soviet invasion. Ligeti’s personal experiences of the brutality of the Nazis and Communists left him with a healthy suspicion of authoritarian regimes and dogmatic positions, whether political or artistic.
His arrival in the West brought him into contact with the European avant-garde, a new source of inspiration (the music of composers such as Stockhausen, Nono and Boulez had been difficult to obtain in Hungary). Over time, however, the hegemony of serialism became increasingly oppressive to a composer whose music displayed an essential tendency towards experimentation, maverick dissent and stylistic diversity-each piece having its own rules. Later during the 1970s, Ligeti became equally suspicious of resurgent neo-romanticism-a reaction against the avant-garde that to him seemed retrograde, saccharine and insouciant. His ‘flirtation' with minimalism (as in Selbstportrait mit Reich und Riley) did not last long, and after the completion of his opera Le grand macabre (completed in 1977), a five-year compositional silence ensued. It was during this period that an extensive search for a new stylistic path took hold.

Unlike major piano-étude composers such as Chopin, Liszt, Rachmaninov and Debussy, Ligeti was no composer-pianist in the traditional sense. He began piano lessons relatively late, aged fourteen, and Musica ricercata (1951-53) was his only previous significant work for solo piano. Yet it was his newly regular contact with the piano while teaching at Hamburg’s Hochschule für Musik und Theater (in 1973 he had been appointed professor of composition) that proved an important catalyst for the composition of Monument, Selbstportrait, Bewegung for two pianos (1976), the Trio for violin, horn and piano (1982), and the Études. Ligeti himself spoke of the physical pleasure of playing the piano, and its essential role in his compositions for the instrument:

I lay my ten fingers on the keyboard and imagine music. My fingers copy this mental image as I press the keys, but this copy is very inexact: a feedback emerges between ideas and tactile/motor execution. This feedback loop repeats itself many times, enriched by provisional sketches … The result sounds completely different from my initial conceptions: the anatomical reality of my hands and the configuration of the piano keyboard have transformed my imaginary constructs.
The availability of a piano was just one of many important factors in the genesis of the Études. In 1980 Ligeti discovered the complex polyrhythmic Studies for player piano by the American composer Conlon Nancarrow (1912-1997)-pieces that, despite being mostly unplayable by a solo pianist, opened new imagined avenues for virtuosity. Also around that time, Ligeti became fascinated, via the work of ethnomusicologist Simha Arom, by African polyphony, particularly music of Banda-Linda horn ensembles. One of Ligeti’s composition students, the Puerto Rican Roberto Sierra, brought recordings of Latin-American music to class for discussion. Add these musical discoveries to Ligeti’s knowledge of the Western canon (including fourteenth-century ars subtilior and Renaissance polyphony), Balinese gamelan, the jazz of Bill Evans and Thelonious Monk, and Eastern European folk traditions, and the panorama of Ligeti’s musical inspirations acquires awe-inspiring and encyclopaedic proportions. In addition, Ligeti’s extra-musical interests encompassed mathematics, science, literature and visual art; hence mathematical chaos theory and fractal geometry (as developed by Edward Norton Lorenz and Benoit Mandelbrot respectively), the ‘impossible drawings' of Escher, and the metaphorical writings of Jorge Luis Borges and Lewis Carroll also emerged as pivotal sources of ideas.

Ligeti himself spoke of imagining in the Études ‘highly emotive music of high contrapuntal and metric complexity, with labyrinthine branches and perceptible melodic forms, but without any “back to” gesture, not tonal but not atonal either.‘ The pianistic consequences are fearsome indeed, far exceeding the dexterity and acrobatics required to perform études by Chopin and Liszt. Although Vertige and Der Zauberlehrling take traditional pianistic techniques to new extremes (double notes and rapid repeated notes respectively), an entirely new virtuosity in many of the Études evolves from complex textures in which the independent pulsation of melodic lines, harmonies and rhythms is paramount. It is more a question of ‘brain-splitting’ than ‘finger-breaking', the performer’s two hands frequently tasked with maintaining discrete and fully independent patterns of pitch class, articulation, accentuation and rhythm. Every register of the piano, from the very lowest key to the very highest, is deployed to full effect, from the softest whispers to the most violent and brutal outbursts, just as the full range of human emotion (including a sense of irony and humour) is explored.

Désordre (‘Disorder') is an ingenious representation of mathematical chaos in the form of a rapid-pulsation study. With the left hand confined to the black keys (pentatonic scale) and the right to the white keys (suggesting Locrian mode), each hand begins an accented melody accompanied by a stable quasi-aksak (‘limping') rhythmic figure of 3+5 quavers. After only four bars the right-hand pattern loses a quaver, a small perturbation that is repeated at regular intervals, resulting in a growing asynchrony of the left- and right-hand melodies. Concurrent with this process, the melodic material itself is gradually compressed; the aural experience is of entrapment in a maelstrom, the feeling of an uncontrollable accelerando and a climactic implosion or collapse of the material at the extreme ends of the keyboard. The final pages re-establish the opening stable figure in the upper half of the piano, but the texture becomes chaotic again, the left hand this time gaining a quaver note and engendering asynchrony in the opposite direction.

Cordes à vide (‘Open strings') is reflective in character, proceeding through gently falling cascades of quavers in perfect-fifth intervals that create a kaleidoscopic multi-coloured harmonic ‘impressionism'. Rhythmic compression of the quavers to progressively shorter note values creates a gradual intensification that reaches a climax at the very top of the piano before plunging to the depths of the bass (reminiscent of Ligeti’s orchestral work Atmosphères). Towards the end, murmured demisemiquaver bass passages accompany a lamenting horn call and its fragmented echoes.

Touches bloquées (‘Blocked keys') uses a technique already explored in Ligeti’s Selbstportrait for two pianos. The incessant quaver continuum, taken by alternate hands and played ‘as fast as possible' (or ‘even faster'!), stutters sporadically when some of the keys required are obstructed. Respite from the frenetic passagework is provided by a comic episode of deliberately unsuccessful octaves, reminiscent of clowns ‘who pretend to be unable to execute some feat that they can really perform wonderfully'.
Capricious and witty, Fanfares develops increasingly complex patterns of quasi-traditional major and minor fanfare motifs over a persistent aksak ostinato rhythm of 3+2+3 quavers that repeats 208 times and lasts the entire duration of the study. There is much variety, vitality and charm here, achieved by rhythmic displacement, dynamic contrasts and daring registral effects. Are we hearing Bartókian rhythms (the original title was Bartoque) or echoes of Latin American salsa? By contrast, Arc-en-ciel (‘Rainbow') is slow and contemplative, marked with a flexible tempo that should fluctuate ‘as in jazz'.

The allusion to the harmonic and timbral world of Debussy in Ligeti’s second book of Études is achieved obliquely by reference to a musical orient. Galamb borong may mean ‘melancholic pigeon' in Hungarian, but the title is also mock Balinese, reflecting the étude’s ‘fake gamelan' world. Here Ligeti superimposes the two possible whole-tone scale collections, one in each hand, yielding harmonic false relations that seem to mimic non-Western tuning systems. Later in the second book, Entrelacs (‘Interlacing') espouses a similar principle, though there the independent melodic lines (more than one in each hand) reach a new and bewildering level of layered complexity. Both Entrelacs and Der Zauberlehrling (‘The sorcerer’s apprentice'), the latter an étude of dizzyingly rapid note repetition, are dedicated to the French pianist Pierre-Laurent Aimard, who worked extensively with the composer over a long period of time and who is closely associated with this music. However, one should not forget the German pianist Volker Banfield, dedicatee of L'escalier du diable and Fém, who also gave important early performances of the Études.

‘Fém' means ‘metal' in Hungarian, and also resembles ‘fény' (‘light'), both reflective of this étude’s bright, hard-edged metallic sound. Ligeti would surely have been aware that ‘fem' also means ‘five' in Swedish (his opera Le grand macabre had been premiered in Stockholm with a Swedish translation of the libretto)-a translation of the original French title, Quintes, that reflects the perfect-fifth-dyad material. This material is arranged, as in Désordre, with a different rhythmic structure in each hand. The allusion to Banda-Linda polyphony here is notable, as is the peaceful coda where the original material is presented in a distant slow-motion pianissimo. Vertige is perhaps the most difficult étude of all, consisting of waves of rapid falling chromatic scales that intercept and interrupt each other at different time intervals. Like Vertige, L'escalier du diable (‘The devil’s staircase') and Coloana infinită (‘Infinite column') explore the phenomenon of spirals in nature, in man-made objects and in sound. L'escalier is based on a vigorous aksak rising chromatic figure with tritonal echoes (in pre-Baroque Western musical history the tritone interval was believed to evoke the devil), inspired also by mathematical Cantor sets and a particularly exhausting and drenched bicycle ride up the cliffs of Santa Barbara in the face of a violent storm. Coloana infinită takes its name from Constantin Brâncuși’s thirty-five-metre-high sculpture, located in Târgu Jiu. This brutally dense and compact étude maintains its vertiginous trajectory through two-part ‘crawling' patterns in each hand that overlap, cross and with constant crescendo sustain the illusion of continuous ascent.
Book 3 was left incomplete as Ligeti’s health deteriorated, and of plans for at least six études only four were realized. No easier to perform than the études of the earlier books, the textures here are more economical, white notes dominating (White on white and Canon), and based on strict canon in all except Pour Irina. Common to all except À bout de souffle (‘Out of breath') is the division of each étude into sections of slower and faster tempi. Expanding upon the feeling of En suspens, the only slow étude in Book 2, there is an enigmatic quality to these final piano pieces, the last two études dissipating their energy with short, slow-motion codas that (unlike in Fém) remain unresolved, as though asking questions but offering no answers.
On a personal note, the process of preparing and repeatedly performing the Études over several years has been an exhilarating and exhausting venture. For all their technical pyrotechnics, I have always believed that they must not become an aural-visual spectacle, a Herculean tour de force that can leave audiences stunned by achievement yet left in the cold. As E D Hirsch might explain, we must not ignore the ‘ghost in the musical machine' or imagine that ‘the problems of interpretation will be resolved into operational procedures'. Putting the emotional and evocative power of these pieces centre stage despite their intransigent virtuosity is-for me at least-the ultimate challenge laid down by these extraordinary works.
Danny Driver
$29.99Add to basket ›