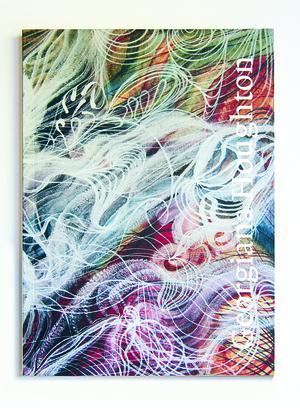 Georgiana Houghton (1814-1884), was an English artist, a devout middle class Christian, and a Spiritualist. She attended her first séance in 1859 at the age of forty-five, and began guided water colour and gouache drawing in July 1861, under the spirit, Henry Lenny. Her first drawings were the spirit flowers and fruits of those departed, heavenly representations of earthy plants. But by November 1861 Georgiana was painting what would appear to be abstract images with titles such as The Holy Trinity, and later, The Eye of the Lord, or The Sheltering Wing of the Most High. These paintings would become possibly the first abstract images in contemporary art. Paintings, she repeatedly insists, were ‘entirely guided by Spirits,‘ with ‘no idea being formed in my own mind as to what was going to be produced.’
From within a small group of devoted spiritualists Georgiana would become an influential advocate for Spiritualism, speaking publicly, publishing three books on spirit painting and photography and her evenings at home in spiritual séance. She held a self-funded solo exhibition at the Old Bond St Gallery in 1871, showing 155 works on paper. Generally, the reviews were scathing, her paintings seen as skeins of coloured wool ‘tangled together in a flattened mess, framed and hung round a gallery'. But she was not deterred. ‘Heavy as the loss, never for one moment have I experienced a shadow of regret for having undertaken it.‘
This beautifully designed large format, full colour book of 203 pages, contains copies of all thirty-five Georgiana Houghton water colour and gouache paintings held at the Victorian Spiritualists’ Union (VSU), North Melbourne. The book provides descriptions on Houghton’s way of working, and also documents the investigations made into the materials and equipment she used. The now famous abstract spiritualist paintings, and the history of the VSU’s connectivity with the Houghton paintings being in Australia, is introduced by past president Alan Bennett, and current president the Rev Lorraine Lee Tet.
$100.00Add to basket ›

END_OF_DOCUMENT_TOKEN_TO_BE_REPLACED

Utsuwa: Japanese Objects for Everyday Use