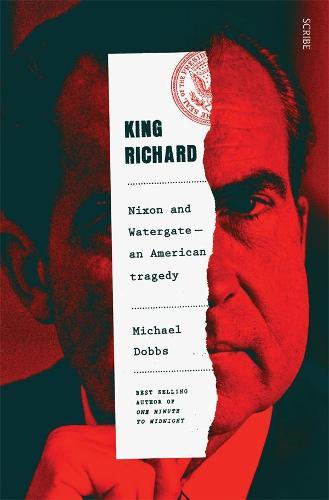 From the author of the acclaimed One Minute to Midnight: a sharply focused, riveting account - told from inside the White House - of the crucial days, hours, and moments when the Watergate conspiracy consumed, and ultimately toppled, a president.
In January 1973, Richard Nixon had just been inaugurated after winning re-election in a historic landslide. But by April 1973, his presidency had fallen apart as the Watergate scandal metastasized into what White House counsel John Dean called “a full-blown cancer.” King Richard is the intimate, utterly absorbing narrative of the tension-packed hundred days when the Watergate burglars and their handlers in the administration turned on one another, revealing their direct connection ties to the White House.
Drawing on thousands of hours of newly-released taped recordings, Michael Dobbs takes us into the very heart of the conspiracy, recreating these dramatic events in unprecedentedly vivid detail. He captures the growing paranoia of the principal players and their desperate attempts to deflect blame as the noose tightened around them and the daily pressures became increasingly unbearable. At the center of this spellbinding drama is Nixon himself, a man whose strengths, particularly his determination to win at all costs, were also his fatal flaws. Structured like a classical tragedy with a uniquely American twist, this is an epic and deeply human story of ambition, power, and betrayal.
$35.00Add to basket ›