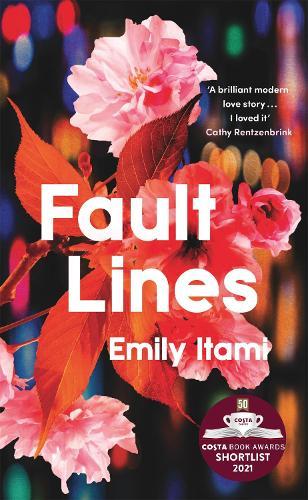 Mizuki is a Japanese housewife. She has a hardworking husband, two adorable children and a beautiful Tokyo apartment. It’s everything a woman could want, yet sometimes she wonders whether it would be more fun to throw herself off the high-rise balcony than spend another evening not talking to her husband or hanging up laundry.

Then, one rainy night, she meets Kiyoshi, a successful restaurateur. In him, she rediscovers freedom, friendship, a voice, and the neon, electric pulse of the city she has always loved. But the further she falls into their relationship, the clearer it becomes that she is living two lives - and in the end, we can choose only one.
Alluring, compelling, startlingly honest and darkly funny, Fault Lines is a bittersweet love story and a daring exploration of modern relationships from a writer to watch.

Mizuki is a square peg in a round hole. Despite her efforts to break the mould, she finds herself cast as a Japanese housewife and mother of two. She loves her kids, but needs more from life than crafting the ultimate lunchbox bento. She’s more ambivalent about her perennially exhausted salaryman husband, who’s tethered to his phone and barely registers her as a person, let alone a woman. So she’s primed for rebellion when she crosses paths with the attentive Kiyoshi, a restaurateur who’s managed to carve out a life free of the restrictions of Japanese adulthood.

Under the guise of showing Kiyoshi the hidden Tokyo neighbourhoods and bars and people she knew in her earlier, more adventurous life, Mizuki starts to rediscover a sincere love for her city – and for freedom. At first, she deludes herself that her relationship with Kiyoshi will be harmlessly platonic, but it inevitably turns romantic. Eventually, she’ll have to choose: live a suffocating but secure life with her adored children and solid provider Tatsuya, or metaphorically jump off the balcony with Kiyoshi.

Mizuki is at a familiar impasse for people approaching middle age: she’s attracted to the lure of a clean slate, but knows it isn’t really possible. For her, a love of family and place is a comfort, but also an albatross around the neck. Whatever she ends up choosing will be tainted by the knowledge that there’s a difference between love and happiness.

Itami’s assured debut is a compelling, satisfying and complex love story, not just between Mizuki and Kiyoshi, but between a regretful woman and her home town, her kids and her life choices. It deftly shows how the pull of societal expectations can be so difficult for women to resist, especially within such a regimented culture.

Rebecca Crisp works as a bookseller at Readings Carlton.