The Holy Family: or Critique of Critical Critique 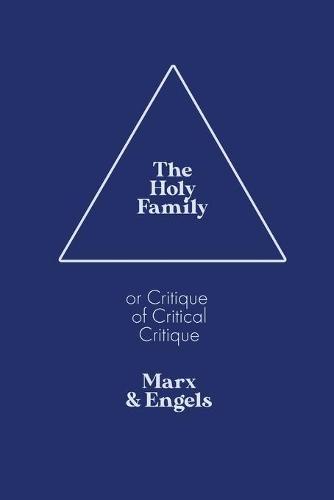 The Holy Family: or Critique of Critical Critique

During Engels' short stay in Paris in 1844, Marx suggested the two of them should write a critique of the rage of their day, the Young Hegelians. In the doing was born the first joint writing project between the two men – and a life-long association that would change the world. At the end of August, 1844, Engels passed through Paris, en route to his employment in Manchester, England, from visiting his family in Barmen (Germany). During 10 days in the French capital, he met Marx (for the second time). After talking, they began drawing up plans for a book about the Young Hegelian trend of thought very popular in academic circles. Agreeing to co-author the Foreword, they divided up the other sections. Engels finished his assigned chapters before leaving Paris. Marx had the larger share of work, and he completed it by the end of November 1844. (Marx would draw from his Economic and Philosophical Manuscripts, on which he’d been working the spring and summer of 1844.) The foremost title line - The Holy Family - was added at the suggestion of the book publisher Lowenthal. It’s a sarcastic reference to the Bauer brothers and their supporters. The book made something of a splash in the newspapers. One paper noted, that it expressed socialist views since it criticised the inadequacy of any half-measures directed at eliminating the social ailments of our time. The conservative press immediately recognized the radical elements inherent in its many arguments. One paper wrote that, in The Holy Family, every line preaches revolt… against the state, the church, the family, legality, religion and property. It also noted that prominence is given to the most radical and the most open communism, and this is all the more dangerous as Mr. Marx cannot be denied either extremely broad knowledge or the ability to make use of the polemical arsenal of Hegel’s logic, what is customarily called ‘iron logic.’ Lenin would later claim this work laid the foundations for what would develop into a scientific revolutionary materialist socialism. Bruno Bauer attempted to rebut the book in the article Charakteristik Ludwig Feuerbachs - which was published in Wigand’s Vierteljahrsschrift, Leipzig 1845. Bauer essentially claimed that Marx and Engels misunderstood what he was really saying. Marx would reply to that article with his own article - published in the journal Gesellschaftsspiegel, Elberfeld, January 1846. And the matter was also discussed in chapter 2 of The German Ideology.