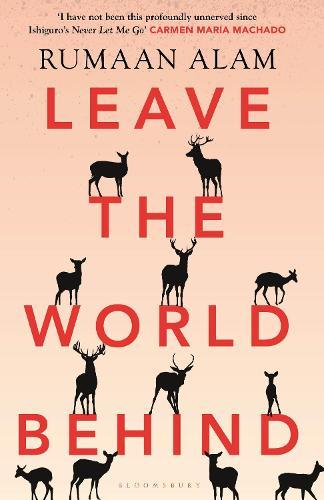 Amanda and Clay head to a remote corner of Long Island expecting a holiday: a quiet reprieve from life in New York City, quality time with their teenage son and daughter and a taste of the good life in the luxurious home they’ve rented for the week. But with a late-night knock on the door, the spell is broken.
Ruth and G. H., an older couple who claim to own the home, have arrived there in a panic. These strangers say that a sudden power outage has swept the city, and - with nowhere else to turn - they have come to the country in search of shelter. But with the TV and internet down, and no phone service, the facts are unknowable. Should Amanda and Clay trust this couple - and vice versa? What has happened back in New York? Is the holiday home, isolated from civilisation, a truly safe place for their families? And are they safe from one another?
An impossibly compelling literary thriller about the world we live in now, Rumaan Alam’s novel is keenly attuned to the complexities of parenthood, race and class. Leave the World Behind explores how our closest bonds are reshaped in moments of crisis - and how the most terrifying situations are never far from reality.

Amanda, Clay and their two teenaged children are expecting a quiet vacation. They’ve rented an upmarket house on Long Island for a week – revelling in the chance to enjoy some rest from the bustle of New York City and their demanding jobs. No cell service. Plenty of peace and quiet.

Everything quickly changes when, late one night, Ruth and GH – the couple who own the house – come knocking at the door. A city-wide blackout has sent them rushing to their vacation home. It quickly becomes clear that something much stranger than just a blackout is happening, but without cell service – and then without TV or internet as well – the two couples have no way of knowing what’s going on in the outside world. Is the vacation house, or anywhere for that matter, safe?

Rumaan Alam’s third novel is a compulsively readable thriller. The tension is palpable. You’re as desperate to know what is going on in the outside world as the characters are. Creating just as much tension as the unknown are the issues of class and race that inevitably come up between the White, solidly middle-class Amanda and Clay and the Black, wealthy Ruth and GH.

Leave the World Behind has been generating plenty of hype. It is a finalist for the National Book Award and has already been optioned into a Netflix film starring Denzel Washington and Julia Roberts. All of this before it was even published. Reading it, however, it is easy to see why. The novel is certainly timely. The feelings of dread and ignorance concerning the outside world will be familiar to all of us dealing with the Covid-19 crisis. More importantly, it is just a fantastic read. It is strange, original, and thrilling. It is tempting to compare it to other post-apocalyptic books but there is nothing out there quite like it. This is destined to end up on the ‘best of’ lists at the end of the year, so do yourself a favour and read it immediately.