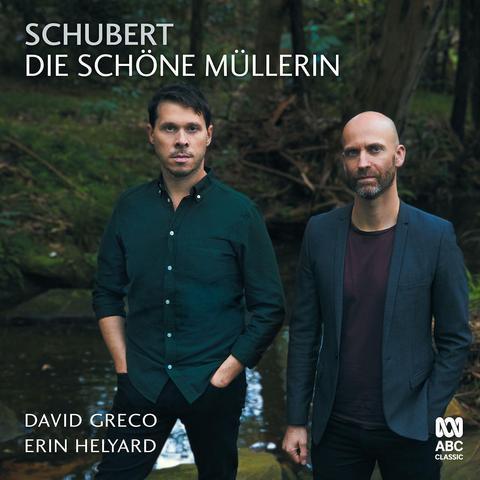 Following their 2018 recording of the great song cycle Winterreise, David Greco and Erin Helyard continue their exploration of Schubert’s songs with their new recording of Die schöne Müllerin. Composed in 1823, it is one of the earliest extended song cycles, and one of Schubert’s most important works.
This iconic work follows a young miller, his unrequited love for the miller’s beautiful daughter, and the brook that seems to speak to him and reflect his growing sadness back at him. At turns joyful and spring-like, at others somber and morose, it is a complex and beautiful set of songs that has been recorded countless times by many of the greatest performers of the twentieth century.
But by using a piano from Schubert’s era, and studying singers and pianists of the past, Greco and Helyard present a very different Müllerin; an interpretation that retains all the beauty of the work we know and love, but also reveals new colour, expression and personality as Schubert might have intended it.
This is a superb recording by two of Australia’s finest artists, a thrilling and captivating rendition of a great work that reveals new beauty around each bend of the river.

Arcangelo Corelli (1653–1713) was an influential composer, and the earliest famed solely for his instrumental works. His contemporaries were (and remain) known for their vocal compositions as much as their instrumental ones, so it is unusual that Corelli has such enduring appeal despite having shied away from composing for the voice. Genesis Baroque’s debut recording – Corelli’s Concerti Grossi, Op. 6 – attests to that appeal. All twelve concerti presented here traverse a wide range of moods, colours and characters, and possess the hallmark elegance and drama of their day.

Genesis Baroque is a relatively young Melbourne ensemble, formed in 2017 by multitalented violinist and psychologist Jennifer Kirsner. Eminent baroque violinist Lucinda Moon is the ensemble’s musical director and concertmaster, and she offers many fine solos on this disc, alongside similarly distinguished violinist Sophie Gent. Although not soloists in the traditional sense (their parts are integrated into the texture of the ensemble), Moon and Gent both give lively, intelligent performances. Generally, this is an outstanding recording, brimming with effervescence, and proudly featuring an all-Australian cast of musicians. It is a slick production – from its packaging (featuring an image of the Pantheon in Rome, which is where Corelli is buried), to the production values, and to the ensemble happy snaps within. Notable is the Christmas concerto grosso in G minor – ‘Fatto per la notte di natale’ – so popular during Corelli’s lifetime that it was apparently performed at his funeral.

Recently, I have spent many a happy afternoon at home, listening to this CD from go to whoa, such is the comforting nature of Corelli’s mellifluous music and Genesis Baroque’s superb playing. A recording by which to relax, cook, read, sew, garden, and while away a lockdown hour. Genesis Baroque’s Corelli album is the warm musical hug we all need right now.