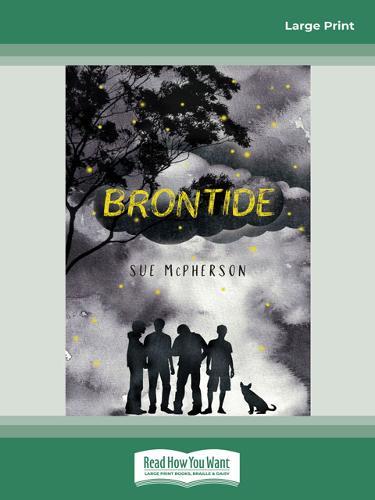 Rob; (and his brother Pen) white Aussies. Rob is completing Year 12, going to schoolies, working as an apprentice in his dad’s company and loves his dog, Nig. Rob believes real men take risks. Pen; fifteen-years-old, storyteller, graffiti artiste extraordinaire with a penchant for male anatomy. Pen is liked by everyone. Pen and Benny Boy are mates. Benny Boy; fifteen-years-old, Aboriginal, loves drawing, fishing and living with his awesome (white) foster Nan. Benny Boy doesn’t trust Rob. Jack; white, male, finishing Year 12, new to the area, from the bush and adopted into an Aboriginal family. Jack has met Pen and reckons he’s a funny bugger. He has also just signed up as an apprentice working alongside Rob-the-knob. Brontide is a coming of age story about four boys and their lot in life. Recounted through storytelling sessions at their school over a period of five days, these boys chronicle their lives. They are at times demanding, occasionally rude, always funny and unexpectedly profound. The boys like to challenge themselves and the rules, and soon realise that not everything goes to planaEURO|