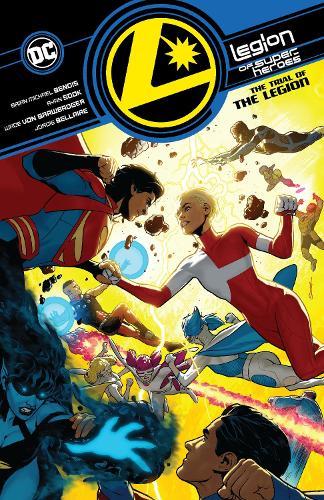 Jump forward in time to the 31st century with comic book superstars Brian Michael Bendis and Ryan Sook as they continue the epic tales of the Legion of Super-Heroes! The trial of the 31st Century! The United Planets has found the Legion of Super-Heroes guilty of crimes against the galaxy, and it,s up to our young heroes to prove their innocence! Featuring an all-star cast of artists, this collection features a surprise 1,000 years in the making…the unstoppable behemoth Rogol Zaar has survived the millennium to haunt Superboy and his teammates! Was this the challenge Brainiac 5 predicted? Is the Legion up to the task? They better be, because the future of New Krypton hangs in the balance! With the planet on the verge of destruction at the hands of one of Jonathan Kent’s deadliest foes, the young hero will have to make the ultimate sacrifice to save his friends, family, and heritage-and it could lead to the start of a monumental new chapter in the future of the DC Universe! Long live the Legion! Plus, not everything is doom and gloom in the 31st century-young romance is alive and well! Find out who’s dating whom in another exhilarating chapter of the Legion of Super-Heroes' epic tale. Eisner Award-winning writer BRIAN MICHAEL BENDIS is joined by master artist RYAN SOOK and an all-star team of guest artists (JO LLE JONES, YANICK PAQUETTE, JOHN ROMITA JR., ARTHUR ADAMS, and many more!) for one of the most ambitious mainstream comic books ever created! This volume collects Legion of Super-Heroes #7-12.