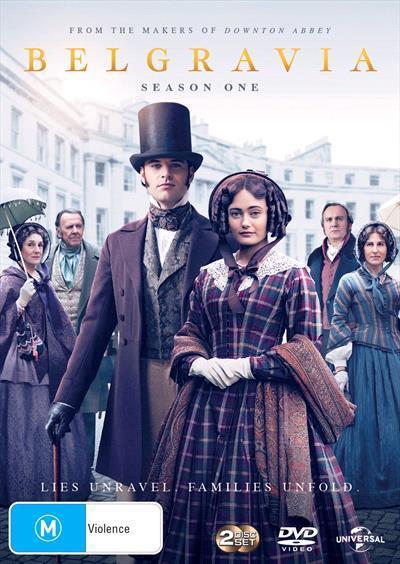 On the eve of the Battle of Waterloo, two young lovers forge a legacy that will create scandal for generations to come.
Years later, when the humble Trenchards (Tamsin Greig and Philip Gleinster) move to Belgravia, they find themselves mixing with the venerated Brockenhursts (Harriet Walter and Tom Wilkinson). The families share a history that threatens inheritances and reputations and there are those who would do anything to ensure secrets remain buried.
Pride and loyalty will be tested as forbidden love blossoms amongst the rivalry and lives hang in the balance.

The new six-part series from Julian Fellowes, the creator of Downton Abbey, opens with a view he knows well – high society at play. In Belgravia, written by Fellowes and based on his novel, the scene is the Duchess of Richmond’s ballroom, in her temporary Brussels abode. Inside, the rich and aristocratic gossip and dance. Outside, Napoleon and his army march into Belgium. It’s 15 June, 1815. Three days later, the British troops – many of whom attend the ball – will confront Napoleon at Waterloo.

It’s an exciting start to a series where fictional characters mingle with historical ones (that ball really happened). Fellowes’ key inventions are the Trenchards, a family repeatedly reminded that they have neither title nor rank. But James has business nous, providing the British troops with essential supplies. His wife Anne is cautious and admired. Their daughter Sophia is beautiful, determined and in love with Edmund, the Duchess’s nephew. Her actions set the Trenchard family’s story in motion.

Belgravia is resplendent with sumptuous costumes, furnishings and more – like all period dramas, class and gender politics play a vital, damning role. From the Richmonds’ ball we are transported to 1841 and the fashionable city enclave that gives the series its title. James has made his fortune constructing modern London, including Belgravia, alongside the real master-builder, Thomas Cubitt. The Trenchards have escaped the middle-classes, but a distant family secret threatens their expulsion.

‘You’re so lucky to have been born a man,’ a young woman remarks to the man she loves, and while this is certainly historically accurate, what Belgravia highlights is just how much society evolves because of women’s actions. Like Downton Abbey, Belgravia’s finest moments feature formidable British actresses facing off. Fellowes gifts us Tamsin Greig as Anne and Harriet Walter as the Countess of Brockenhurst, in clashes that are tense, sharp, and compassionate. Despite an arguably too-swift conclusion, Belgravia is, as the Countess might say, a superb diversion.