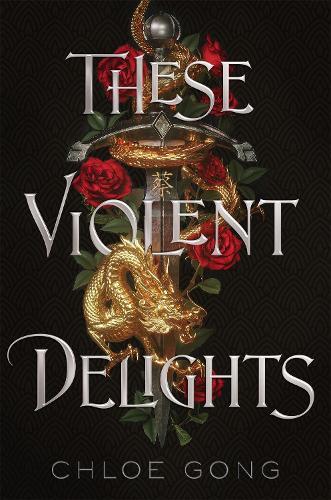 The year is 1926, and Shanghai hums to the tune of debauchery.

A blood feud between two gangs runs the streets of Shanghai red, leaving the city in the grip of chaos. At the heart of it all is eighteen-year-old Juliette Cai, a former flapper who has returned to assume her role as the proud heir of the Scarlet Gang - a network of criminals far above the law. Their only rivals are the White Flowers, who have fought the Scarlets for generations. And behind every move is their heir, Roma Montagov, Juliette’s first love … and first betrayal.
But when gangsters on both sides show signs of instability culminating in clawing their own throats out, the people start to whisper. Of a contagion, a madness. Of a monster in the shadows. As the deaths stack up, Juliette and Roma must set their guns-and grudges-aside and work together, for if they can’t stop this mayhem, then there will be no city left for either to rule.

There have doubtless been many retellings of Shakespeare’s classic love story Romeo and Juliet but few contain such a unique and compelling premise as Chloe Gong’s debut novel, These Violent Delights. The book opens in 1920s Shanghai, a glittering city overrun by Western colonisers but closely controlled by the Chinese Scarlet Gang and the Russian White Flowers, two rivals locked in a relentless blood feud. Enter Juliette Cai and Roma Montagov, heirs to the two clans and ex-lovers who share a bittersweet history of bloodshed and betrayal that neither can forget. Though it’s the last thing either wants, the two are forced to work with each other as their city is enveloped by a mysterious contagion that is causing its residents to go mad. Together they must unravel a web of hidden secrets to uncover who or what is behind it all.

A teeming metropolis of a city, Shanghai makes for a fascinating backdrop that is enriched by the ‘Roaring Twenties’ period setting – one of smoky burlesque bars and flapper girls. The glamour is matched by an undercurrent of danger, as mobsters stalk the streets, the opium market booms and Communists scheme to overthrow the Nationalist Chinese government. Gong also manages to create a modern take on this historical setting through queer representation and a brutal takedown of colonialism.

The first in a duology, These Violent Delights manages to transform Romeo and Juliet’s ageless tale into a historical fantasy novel that feels completely new. Between the scenes of gory action and brutal powerplay, there is a delicate romance that will leave your heart aching. Fans of The Diviners series by Libba Bray will undoubtedly eat this novel up. For ages 13+.