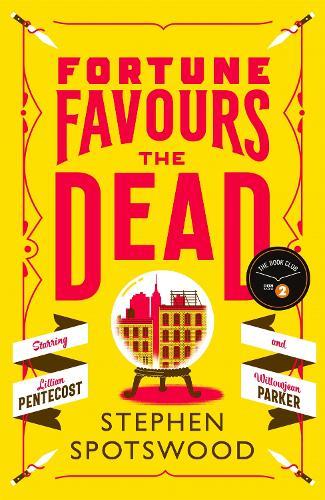 The first in the brilliant new Pentecost and Parker series, FORTUNE FAVOURS THE DEAD is a hugely entertaining murder mystery set in 1940s New York City.
New York, 1946. Lillian Pentecost is the most successful private detective in the city, but her health is failing. She hires an assistant to help with the investigative legwork. Willowjean Parker is a circus runaway. Quick-witted and street-smart, she’s a jack-of-all-trades with a unique skill-set. She can pick locks blindfolded, wrestle men twice her size, and throw knives with deadly precision - all of which come in handy working for Ms P.
When wealthy young widow Abigail Collins is murdered and the police are making no progress, Pentecost and Parker are hired by the family to track down the culprit. On Halloween night, there was a costume party at the Collins' mansion, where a fortune teller performed a seance which greatly disturbed Abigail. Several hours later her body was discovered bludgeoned to death in her late husband’s office. Problem is, the door to the office was locked from the inside. There was no-one else in the room, and the murder weapon was beside the victim; the fortune teller’s crystal ball.
It looks like an impossible crime, but Pentecost and Parker know there is no such thing…
$32.99Add to basket ›