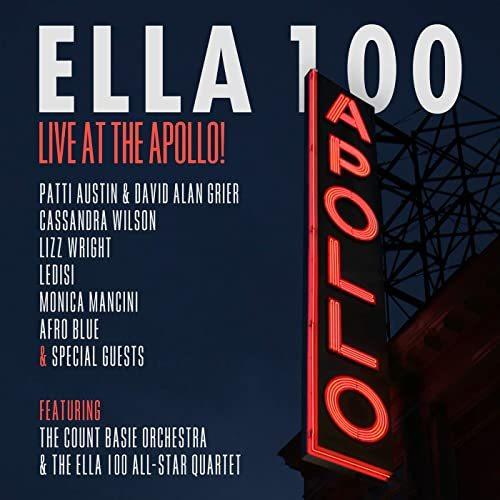 An all-star tribute to Ella Fitzgerald that was recorded in celebration of what would have been the centennial of her birth. The concert opens with a recreation of Ella’s 1934 appearance in a Apollo Amateur Contest when, at the age of 17, she made a last minute decision to sing instead of dance. Her performance of “Judy” from that fateful night is sung here by Ayo (Ayodele Owolabi), also at the age of 17.
The concert is MC’d by Patti Austin and David Allan Grier who lend their vocal expertise throughout the concert. Other guest vocalists include Andra Day, Ledisi, Lizz Wright, Cassandra Wilson, Monica Mancini and the award winning a cappella group from Howard University, Afro Blue. Accompanying the singers are the Count Basie Orchestra and strings, under the direction of Scotty Barnhart.
Highlights include a swinging version of Ella’s signature hit “A Tisket, A Tasket”, a stunning performance of “The Nearness of You” by Lizz Wright, a Gershwin medley celebrating Ella and Louis Armstrong’s album Porgy and Bess and “Cry Me A River” by Cassandra Wilson. The album concludes with a performance from 1970 of “People” sung by Ella recorded in Budapest. Ella 100 is produced by 8-time GRAMMY and Emmy Award recipient and Ella Fitzgerald alumni Gregg Field.
$22.95Add to basket ›