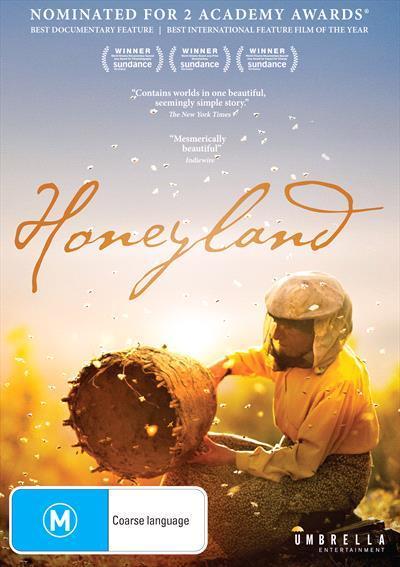 Nestled in an isolated mountain region deep within the Balkans, Hatidze Muratova lives with her ailing mother in a village without roads, electricity or running water. She’s the last in a long line of wild beekeepers, eking out a living farming honey in small batches to be sold in the closest city a mere four hours' walk away.
Hatidze’s peaceful existence is thrown into upheaval by the arrival of an itinerant family, with their roaring engines, seven rambunctious children and herd of cattle. Hatidze optimistically meets the promise of change with an open heart, it doesn’t take long however, before a conflict evolves that exposes the fundamental tension between nature and humanity, harmony and discord, exploitation and sustainability.
The debut feature from documentarians Ljubomir Stefanov and Tamara Kotevska, Honeyland, is made with the widescreen sweep of an epic, yet clearly built from an intimate collaboration between filmmakers and subject. With a surprising sense of humour, its a tough and tender portrait of the delicate balance between humankind and nature, a glimpse at a fast disappearing way of life, and an unforgettable testament to one extraordinary womans resilience.

Honeyland is a lyrical, realist documentary and an intimate character study of a resilient, wise woman. Hatidze Muratova is in her fifties, living a simple life in a remote and primitive mountain village in Northern Macedonia where she cares for her bedridden mother and her wild honeybees with the same devotion. Hatidze makes a modest living farming small batches of sticky golden honey from bees nesting in the surrounding mountains and from others buried deep in the hollows of fallen trees, as well as the apiaries on her own small plot of land.

Hatidze and her mother are Macedonians of Turkish descent, but Honeyland isn’t explicitly concerned with geopolitics. Filmmakers Ljubomir Stefanov and Tamara Kotevska confront the textures and rhythms of this unique place through the experience of one person, exemplified in the film’s meditative opening sequence which unwraps the specifics of Hatidze’s world before our eyes. The cinematography has an epic sweep, which works beautifully alongside the filmmakers’ ‘fly on the wall’ documentary approach.

Honeyland explores a tradition at risk of annihilation. That danger is stressed by the sudden noisy arrival of a family of nine to the land next door to Hatidze’s. Their chaotic energy violates her peace, but Hatidze makes room for them and tries to impart what she knows about wild beekeeping – lessons she learned from her grandfather before her. Stefanov and Kotevska couldn’t have known when they pointed their camera at Hatidze’s life (they filmed her over a period of three years) that such impeccable adversaries would unexpectedly roar into the frame.

‘Half for me, half for you,’ Hatidze coos to her bees – it’s her work, and her life’s ethos, emphasising the sustainability of her humble enterprise. Honeybees are critical for a healthy ecosystem and the balance between capitalism and the environment is a delicate one. Through restrained and humane filmmaking, Honeyland shows us just how easily and quickly it can all fall apart.

Oliver Sacks: His Own Life (DVD)