The Korean Kid: A Young Australian Pilot’s Baptism of Fire in the Jet  Fighter Age 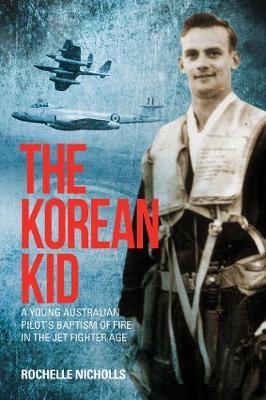 The Korean Kid: A Young Australian Pilot’s Baptism of Fire in the Jet  Fighter Age

A vicious civil conflict erupted on the Korean peninsula in 1950 and sucked 24 nations into a new round of fighting. The world’s two atomic superpowers - the United States and the Soviet Union - menaced each other across an arbitrary border as Korea became the proving ground for a new Cold War. The odds faced by Australia’s young pilots were one in three, that they’d not come back. Or perhaps they’d just never be found, crash in flames into a foreign mountain and become nothing but names in a faraway cemetery. Most had no combat experience. Their planes were obsolete. Their orders were to dive upon a well-armed enemy with their bellies exposed, where one bullet to a fuel-tank meant an inescapable fireball. The Korean Kid is the story of Jim Kichenside and the Australian pilots who took to the skies in the ‘forgotten war’ on the Korean peninsula. Within a week of the North Korean invasion of the South on June 25, 1950, No.77 Fighter Squadron RAAF were in the air: the first United Nations air unit committed to the defence of the overrun South. Of the 340 Australians who perished in Korea, 41 were from 77 Squadron. In 1952, Jim Kichenside was the youngest pilot in 77 Squadron, at just 21 years of age. He entered the Korean theatre with just 8 hours of training on his Meteor jet. Dubbed ‘The Korean Kid’, Jim’s is a story of youth and resilience, of luck and loss, of young men thrust into a war against impossible odds - the first war of the jet age.