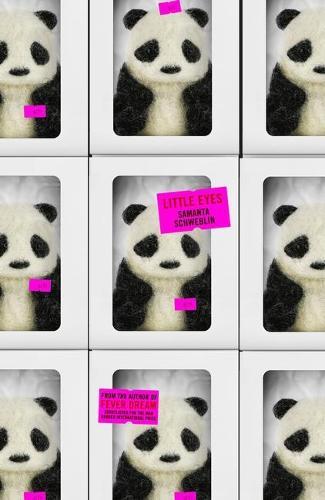 They look harmless enough - you could even call them cute. A cuddly panda, a brightly-coloured dragon, a miniature crow. They’re part of the latest craze exploding from Croatia to Norway to Brazil - they are ‘Kentukis’.
Not quite a phone, not quite a toy, not quite a robot, Kentukis contain cameras which allow someone on the other side of the planet to access the most intimate moments of another person’s life. And it doesn’t take long for these apparently innocent devices to fall prey to our dark obsession with technology.
Reminiscent of the very best of Black Mirror, Little Eyes is a chilling portrait of our compulsively interconnected society. Schweblin irresistibly pulls the reader into an unsettling, unforgettable world of voyeurism, narcissism, and the sinister reality that lies beneath the most seductive of masks.

Several friends have remarked ‘But that sounds like an episode of Black Mirror!’ when I have explained the premise of this book, which is: people around the world are buying kentukis, the latest techno-craze. A kentuki is a cute plush toy with cameras for eyes and small wheels; it lives in your house like a battery-powered pet. Unlike a pet, each one is connected at random to a human ‘dweller’: somebody, somewhere in the world who has bought a software access code, and can now look through your kentuki’s eyes and control its limited movements.

Samanta Schweblin is not an author who coddles her readers, and the book delivers bleak possibilities immediately: in the first few pages a group of teenage girls attempting to cyberbully a classmate are brought up short when their kentuki’s dweller blackmails them via Ouija board. This vicious opening sets the tone perfectly for a story which balances human cruelty and vulnerability on a knife’s edge.

The story is told as a series of vignettes from keepers and dwellers around the world. A widow in Lima spends her days as a pink rabbit in a German apartment; a divorced father in Italy wonders about the ‘toy’ that appears to enjoy babysitting his son; a teenager in Antigua logs on furtively when he should be doing homework, desperate to see snow. Some characters are sympathetic, some seem unhinged – but their motives are never dull, and Schweblin presents their behaviour frankly and without moralising.

It’s an intensely unsettling read that explores the weird thrill of watching and being watched, as well as the two-edged sword of escapism. It asks why intimacy with an anonymous stranger might seem easier or more appealing than intimacy with one’s own friends and family. It is a book that takes no prisoners: I will be thinking about it for ages.

A spine-tingling portrait of our obsession with technology, from Argentinian sensation Samanta Schweblin

A deeply unsettling and disorientating debut novel about obsession, identity and motherhood.