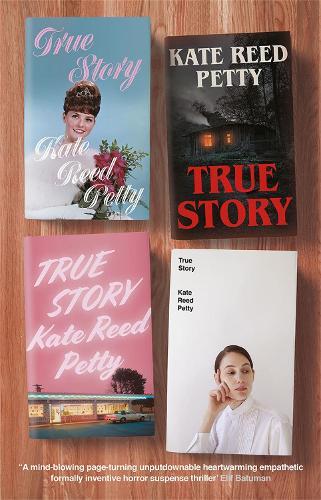 Inventive, electrifying and daring, True Story is a novel like nothing you’ve ever read before.
After a college party, two boys drive a girl home: drunk and passed out in the back seat. Rumours spread about what they did to her, but later they’ll tell the police a different version of events. Alice will never remember what truly happened. Her fracture runs deep, hidden beneath cleverness and wry humour. Nick - a sensitive, misguided boy who stood by - will never forget.
That’s just the beginning of this extraordinary journey into memory, fear and self-portrayal. Through university applications, a terrifying abusive relationship, a fateful reckoning with addiction and a final mind-bending twist, Alice and Nick will take on different roles to each other - some real, some invented - until finally, brought face to face once again, the secret of that night is revealed.
Startlingly relevant and enthralling in its brilliance, True Story is by turns a campus novel, psychological thriller, horror story and crime noir, each narrative frame stripping away the fictions we tell about women, men and the very nature of truth. It introduces Kate Reed Petty as a provocative new voice in contemporary fiction.

Private schoolgirl Alice doesn’t know what happened to her the night of the party. She knows she was very drunk. She knows she was driven home by Richard and Max, two lacrosse players from a nearby high school. She knows that they left her passed out on her porch, running away when her mother saw them and started screaming. What she doesn’t know is what they did to her while she was passed out in the back of the car. Life-shattering rumours spread but the boys tell a different story when they are questioned by the police.

That night, and its repercussions, define not only the next sixteen years of Alice’s life but of fellow students Nick, another lacrosse player, and Hayley, Alice’s best friend. All three must contend with what they know and what they think they know about what happened that fateful evening, until the truth comes to light in the novel’s shocking conclusion.

Kate Reed Petty’s debut is a genre-defying, compulsively readable novel about the power of storytelling and the fallibility of memory. It’s about the stories we tell about ourselves and to ourselves. It’s about who has the power to control and shape the narratives that shape us.

As Alice herself tells us, this is ‘a thriller, a horror, a memoir, a noir’ and will likely appeal to fans of all of those genres. Petty’s control of her narrative is masterful and it’s hard to believe that this is a debut novel. The disparate sections of her novel, spanning different characters, continents, and decades, come together seamlessly in the final chapters. It took all of my self-control not to immediately re-read True Story and I know that I’ll be thinking about this novel for months to come.

Please note that this novel does deal with sexual assault, drug and alcohol abuse, and domestic violence. Petty is never flippant in her approach to any of these topics, but they may be triggering to some.