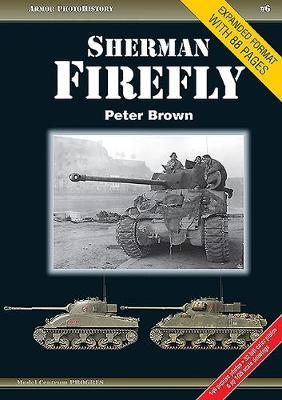 The Sherman Firefly was fitted with the powerful 17-pdr anti-tank gun to counter German Tigers and Panthers. This book covers their development and use with 148 period black and white photos, original documents, 1/35th scale plans and colour plates. By the final stages of W.W. II the American Sherman had become the mainstay of British and Commonwealth armies. However German tanks had increased their armour thickness which mean its original 75 mm gun was no longer adequate. To counter this the 17-pdr anti-tank gun was fitted to many tanks, providing them with enough firepower to defeat the Tigers and Panthers. This book covers the Firefly’s development, production and service in British, Canadian, New Zealand, South African, Czechoslovak and Polish armies. It includes 148 period black and white photos, extracts from original documents, 1/35th scale plans and colour plates. Its author has researched British AFVs for over 40 years, written two other books for Model Centrum Progres and contributed many articles to professional and modelling magazines. Includes: 88 pages, 148 b&w photos, 8 pp 1/35 scale drawings, 29 technical sketches, 32 colour plates. AUTHOR: Peter Brown has been studying AFVs for over 40 years. His main interest is British vehicles, both those produced in the United Kingdom and those from abroad used by British forces. He has written articles for professional and modelling magazines including ARMOR, Armored Car, AFV News, TANK and Military Modelling.