Ten Big Ones & Eleven on Top: Two Novels in One 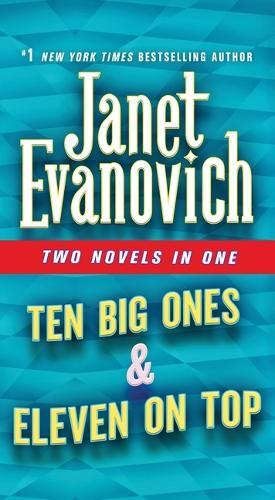 Ten Big Ones & Eleven on Top: Two Novels in One

How much trouble can Stephanie Plum get herself into? Only she can count the ways…in this special two-novels-in-one volume edition from #1 New York Times bestselling author Janet Evanovich that will keep readers laughing until the last page. Ten Big Ones Stephanie, facing a notorious gang in Trenton who want her dead, believes Morelli when he warns her that she’s in too deep. But the gang won’t let her bow out. And now, with Ranger missing in action, Stephanie has to go into hiding, only to stumble on to the secret location of Ranger’s bat cave. Is it the perfect place to disappear? Or will she get into more trouble than she knows by delving into his private world? Eleven on Top Trouble seems to find Stephanie no matter where she goes and now, yet again, she’s struggling with her tangled love life, her chaotic family, and her God-given gift for destroying every car she drives. So what’s a bounty hunter to do? Quit! Stephanie is ready to live a safe life. Be normal. She’s tired of creeps, weirdos, and stalkers. But just when she thinks she’s out, they pull her back in… Evanovich is the master. –San Francisco Chronicle