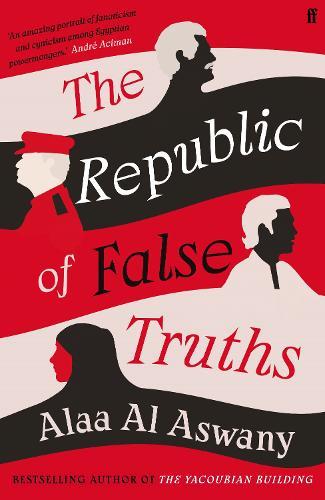 ‘Al Aswany is a voice worth hearing from a country of which we know far too little.’ - Sunday Times
General Alwany is a pious man who loves his family. He also tortures and kills enemies of the state. Under the regime of Hosni Mubarak, Egypt is gripped by cronyism, religious hypocrisy, and the oppressive military. Now, however, the regime faces its greatest crisis. The idealistic young from different backgrounds - engineers, teachers, medical students, and among them the general’s daughter - have come together to challenge the status quo. Euphoria mounts as Mubarak is toppled and love blossoms across class divides, but the general and his friends mount a devastating counter-attack.
With its vivid cast of characters, The Republic of False Truths offers a deeply moving and passionate fictional account of the trauma of the 2011 Egyptian Revolution.

Due to his outspoken criticism of various Egyptian regimes, novelist Alaa Al Aswany has been forced to leave his country. Exile has not silenced him though. In his new book, The Republic of False Truths, he maintains his uncompromising stance and is merciless in his depiction of the corruption and hypocrisy rampant in Egyptian politics during the Arab Spring of 2011.

Both darkly comic and tragic, The Republic of False Truths revolves around the occupation of Tahrir Square in the centre of Cairo. The protest ultimately drew millions of ordinary Egyptians onto the streets and forced then President Hosni Mubarak from office. Filled with idealism and hope, Al Aswany’s different characters cross paths at the barricades, as students and ordinary Egyptians are all transformed by the promise of change. Later, as victims of the brutal conservative backlash against the revolution, their narrative threads intersect again in gaol cells and court appearances. Beatings, arrests, humiliating ‘virginity tests’ and shootings diminish and break even the most committed.

Al Aswany’s allegiances are clearly on the side of change. Like ‘The Emperor’s New Clothes’, he exposes the venality of the conservatives as they hijack religion to stymie the revolution. Pious General Alwany ruthlessly supresses the protests after morning prayers; the modest and lovely Nourhan ‘chastely’ marries her way to her own television show; the Muslim Brotherhood makes clandestine agreements with sworn enemies; and religions of all persuasions are harnessed for financial gain.

The Republic of False Truths kept me engrossed until way too late several nights running. It is a novel that compels you to care about what happens to the cast of characters and to have hope even when cynicism seems the only way to cope.