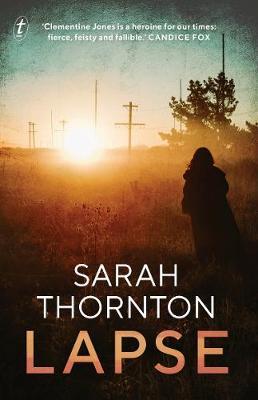 All it took was a lapse … a momentary lapse … to bring Clementine Jones' world crashing down. Now she’s living like a hermit in small-town Katinga, coaching the local footy club. She’s supposed to be lying low, but here she is, with her team on the cusp of their first premiership in fifty years-and the whole bloody town counting on her, cheering her on.
So why the hell would her star player quit on the eve of the finals?
It’s a question she wishes she’d left alone. Others are starting to ask questions too-questions about her. Clem’s not the only one with a secret, and as tension builds, the dark violence just below the town’s surface threatens to erupt. Pretty soon there’ll be nowhere left for Clem to hide.

Deep in the middle of both winter and the AFL season, there are few things more readable than ex-corporate lawyer Sarah Thornton’s Lapse. When Clementine Jones leaves her old, untenable life in Sydney behind, she chooses the regional town of Katinga to hole up in, trying to reinvent herself – or to push the old Clementine away. No longer a lawyer, now the local footy coach, she’s the talk of the town as she brings the team’s decades-long losing streak to a close and spearheads their finals chances. So when her star player, Clancy, quits as the season draws to a close, everyone around wants answers – and so does Clem. But asking them in a town so averse to answering them might just see Clem having to answer some questions of her own – questions she’s already fled hundreds of kilometres to avoid. As her investigation into Clancy’s departure takes a turn for the dangerous, she must decide who she needs to take out of the firing line – and if she’s willing to take herself out of it too.

Clementine is a character so deeply damaged that she can’t help but inflict damage on others – by shutting out friendly locals who try and get close, or, when her carefully crafted simple life starts to show cracks, by helping out. She doesn’t want redemption for what she’s done in the past, she just wants to move on, despite not being able to see anything beyond the next day or three. But Clem’s still got a spark of her old self, the one with confidence and a clear future, and sometimes that fires up again – whether when coaching a team of has-beens into local legends, or fighting for what is right on a murky moral ground. Tackling Clem’s guilt and shame with sympathetic and honest clarity, Thornton’s debut is a small-town, high-stakes, mid-season tale that you don’t need to love footy to enjoy – but it’s always advisable to wear a beanie and scarf for your August reading anyway.