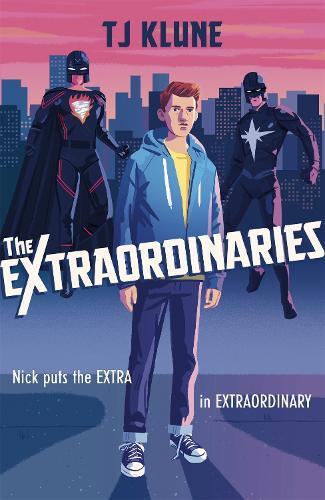 In Nova City, there are extraordinary people, capable of feats that defy the imagination. Shadow Star protects the city and manipulates darkness, and Pyro Storm is determined to bring the city to it’s knees using his power over fire.
And then there’s Nick who…well, being the most popular fanfiction writer in the Extraordinaries fandom is a superpower, right?
Instead of fighting crime, Nick must contend with a new year at school, a father who doesn’t trust him, and a best friend named Seth, who may or may not be the love of Nick’s short, uneventful life.
It should be enough. But after a chance encounter with Shadow Star, Nova City’s mightiest hero (and Nick’s biggest crush), Nick sets out to make himself extraordinary. And he’ll do it with or without the reluctant help of Seth’s help.
TJ Klune’s YA debut is a queer coming-of-age story about a fanboy with ADHD and the heroes he loves is Rainbow Rowell’s FANGIRL meets Brandon Sanderson’s STEELHEART.
$19.99Add to basket ›