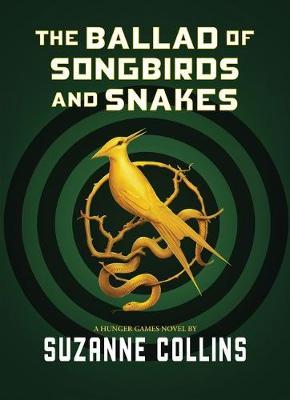 The Ballad of Songbirds and Snakes will revisit the world of Panem sixty-four years before the events of The Hunger Games, starting on the morning of the reaping of the Tenth Hunger Games.
On returning to the world of The Hunger Games, Suzanne Collins said, With this book, I wanted to explore the state of nature, who we are, and what we perceive is required for our survival.
The reconstruction period ten years after the war, commonly referred to as the Dark Days - as the country of Panem struggles back to its feet - provides fertile ground for characters to grapple with these questions and thereby define their views of humanity.

Suzanne Collins’ Hunger Games series – a rollicking mishmash of Battle Royale and America’s Got Talent – sparked endless copycats. But the master herself has returned for this bloody, bold and resolute prequel.

Coriolanus Snow, the future President-we-love-to-hate, is just an ambitious teenager with a controlling grandmother and a rotten case of PTSD. The civil war may have resulted in a Capitol victory, but it bankrupted the Snows. The Hunger Games – in which each year a male and female child from each of the twelve defeated districts are selected by lottery to serve as ‘tributes’ and fight to the (televised) death in an arena – are boring and wildly unpopular.

One of the deranged adults in Snow’s life hatches a plan to spice up the bloodletting by providing the District tributes with Capitol mentors. Young Coriolanus sees it as a wonderful opportunity to better his lot in life. But the District 12 tribute he gets is not all that she seems.

Most of the characters are the adolescent, war-torn versions of the vile, aristocratic overlords we learnt to despise all those years ago. The original series made you imagine what you might do if you were forced to fight your friends or die. This new thought experiment makes you picture what would you do if you had to climb the social ladder in an authoritarian world (that made people fight their friends or die). Shudder to think that Coriolanus Snow is the Trump-era Katniss Everdeen: cynical, narcissistic, morbidly fascinated by the horror around him, and never one to let a crisis go to waste.

Watching strutting peacocks compliment each other at parties while plotting to murder one another is a mainstay of any number of genres, but throw in teenage angst and a gladiatorial slave rebellion and everyone else might as well just go home. Welcome back, Panem.