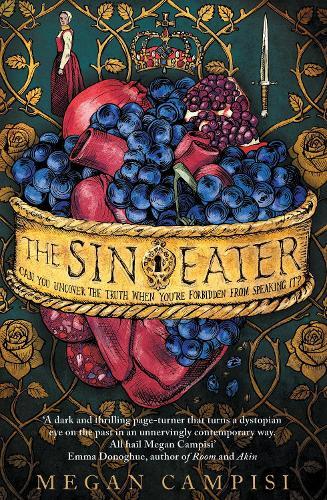 A Sin Eater’s duty is a necessary evil: she hears the final private confessions of the dying, eats their sins as a funeral rite, and so guarantees their souls access to heaven. It is always women who eat sins - since it was Eve who first ate the Forbidden Fruit - and every town has at least one, not that they are publicly acknowledged. Stained by the sins they are obliged to consume, the Sin Eater is shunned and silenced, doomed to live in exile at the edge of town.

Recently orphaned May Owens is just fourteen, and has never considered what it might be like to be so ostracized; she’s more concerned with where her next meal is coming from. When she’s arrested for stealing a loaf of bread, however, and subsequently sentenced to become a Sin Eater, finding food is suddenly the last of her worries.
It’s a devastating sentence, but May’s new invisibility opens new doors. And when first one then two of the Queen’s courtiers suddenly grow ill, May hears their deathbed confessions - and begins to investigate a terrible rumour that is only whispered of amid palace corridors.
$29.99Add to basket ›