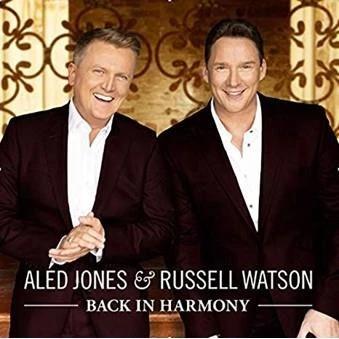 Aled Jones and Russell Watson are two names that have dominated classical music over the past two decades. Last year these two luminaries united to create a duo like no other, bringing together two of the UK’s most distinctive and loved voices. The result was In Harmony, a beautiful collection of arias and classical standards that shot in to the UK Top 10 and is on the way to being certified Gold, as well as amassing over a million streams.
Now, ahead of their upcoming UK tour, Aled and Russell have once again returned to the studio with international platinum selling producer Ian Tilley to continue their joint musical journey.
In a similar spirit to their first record, they have had fun in the studio recording some of their favourite standards, popular classical songs, hymns and arias for Back in Harmony, released November 1st on BMG.
Whether it’s the pomp of Luigi Denza’s Funiculì Funiculà, the uplifting Ennio Morricone penned Nella Fantasia or The Impossible Dream from Broadway musical Man Of La Mancha the album underscores the unity of their voices and reminds us why Aled and Russell are so adored.
Other highlights within the repertoire include The Lord Is My Shepherd, Make Me A Channel Of Your Peace and The Lord Bless and Keep You. Each song holds a real meaning to both of them.
As a seasonal treat too, the album contains the Christmas classic Have Yourself A Merry Little Christmas, as well as a special medley of In The Bleak Mid Winter / O Holy Night / Hark The Herald Angels Sing.
$19.95Add to basket ›

Falla: The Three Cornered Hat, Nights in The Gardens of Spain