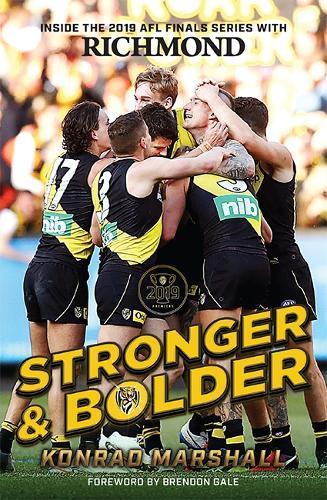 Following on from the best-selling Yellow & Black: A season with Richmond, Konrad Marshall’s acclaimed account of Richmond’s 2017 Premiership, comesStronger and Bolder: The Story of Richmond’s 2019 Premiership.
It tells the intimate story of the Richmond Football Club through the highs and lows of its 2019 finals campaign, explaining how the club recovered from its disappointment of 2018. With unprecedented access to club officials, players and coaches, author Konrad Marshall takes the reader inside the rooms at the key moments of the campaign, chronicling the Tigers' journey to AFL football’s Holy Grail.
This is not just a book of wins and losses, it’s the story of a professional football club and how it operates at every level: from the fitness staff, to the coaching panel, the players, and the Board. The Richmond Football Club has continued to change enormously following the 2017 triumph, its first Premiership since 1980, and Marshall explains in detail the enormous amount of work and thought that has gone into every decision made-on and off the field.
Stronger and Bolder: The Story of Richmond’s 2019 Premiershipis full of unparalleled access to all the key moments, including frank and occasionally emotional interviews with key figures. Yellow & Black:A Season with Richmond was a compulsory read for all football fans, and critically acclaimed. Stronger and Bolderpicks up where it left off.
$29.99Add to basket ›