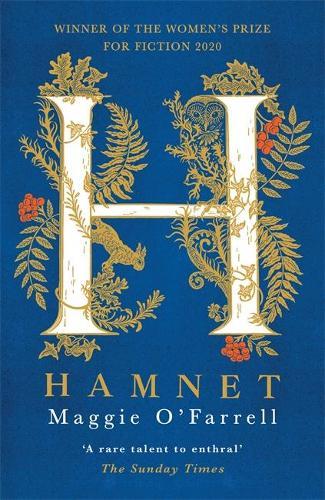 Winner of the Women’s Prize for Fiction 2020
On a summer’s day in 1596, a young girl in Stratford-upon-Avon takes to her bed with a fever. Her twin brother, Hamnet, searches everywhere for help. Why is nobody at home?
Their mother, Agnes, is over a mile away, in the garden where she grows medicinal herbs. Their father is working in London. Neither parent knows that one of the children will not survive the week.
Hamnet is a novel inspired by the son of a famous playwright. It is a story of the bond between twins, and of a marriage pushed to the brink by grief. It is also the story of a kestrel and its mistress; flea that boards a ship in Alexandria; and a glovemaker’s son who flouts convention in pursuit of the woman he loves. Above all, it is a tender and unforgettable reimagining of a boy whose life has been all but forgotten, but whose name was given to one of the most celebrated plays ever written.

In 1596, a young boy named Hamnet died. About four years later, his father wrote the most famous play in English history: Hamlet. This is the story of that boy and his mother.

I took three separate courses on Shakespeare at university. I’ve read countless biographies and analyses by writers such as Stephen Greenblatt, Bill Bryson and Emma Smith. But I still don’t seem to know much about ol’ Willy himself. Of course, nobody really does. The facts of his life could fit in a pamphlet and yet more has been written about him and his works than any other writer in English.

How strange is it that I feel like I know Shakespeare so much better after reading Hamnet? Where facts fail us, fiction comes in and provides dazzling new answers. Drawing heavily on Germaine Greer’s writings on Shakespeare, O’Farrell humanises the man behind the myth. Perhaps more importantly, she provides a voice to the people we often think of as Shakespeare’s supporting characters: his children, his parents, and, of course, his wife, Anne (Agnes) Hathaway.

Agnes, as Anne Hathaway was known as in her father’s will, is the protagonist and emotional heart of the story. Her experiences as a woman, wife and mother form the core of O’Farrell’s narrative. It is her story that captivates, thrusting her in front of her famous husband to capture our attention and imagination.

This is a book on love, loss, and the spaces in which we fall apart. O’Farrell is a masterful writer who deals with her subjects deftly and with empathy. A stunning portrait of a marriage, a family and a tragedy. Highly recommended.

Funny Weather: Art in an Emergency