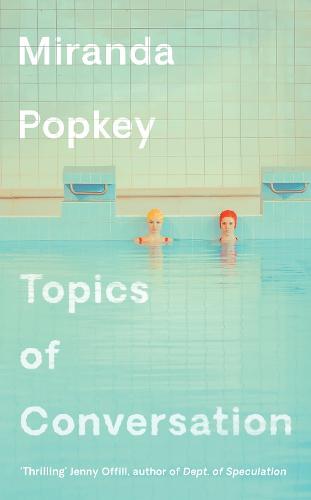 What is the shape of a life? Is it the things that happen to us? Or is it the stories we tell about the things that happen to us? Miranda Popkey’s remarkable debut novel follows one woman as she makes her way through two decades of bad relationships, motherhood, crisis and consolation, each new episode narrated through the conversations she has with other women: in private with friends, late at night at parties with acquaintances, with strangers in hotel rooms, in moments of revelation, shame, intimacy, cynicism and desire.
From the coast of the Adriatic to sun-soaked California, Topics of Conversation maps out one woman’s life through the stories of the women around her and the men they’ve known. Full of the uncertainty of the present and the instability of the past, sizzling with enigmatic desire, it is a seductive exploration of life as a woman in the modern world, of the stories we tell ourselves and of the things we reveal only to strangers.

Miranda Popkey’s debut novel is a narrative told in ten conversations that occur between 2000 and 2017. The unnamed female narrator converses with her employer, her mother, a group of friends left at a house party, a man she has a one-night stand with, and her mothers’ group, among others. She has a theory about why she is privy to so many truths and confidences: ‘I think it is because I like, liked, to drink and I am very good at keeping my face quiet.’

The narrator takes part in the conversations, and they stay with her, helping her to examine how she wants to live, even as she seems to drift in her life and not make any active choices. The first conversation occurs on the Italian coast when she is working as a nanny. Her employer joins her on the balcony and opens up about her marriage. She describes the power imbalances that have characterised the union; what she has done, and, what she would be prepared to do, to redress these. From this chapter it is clear that Popkey will not be toeing any ‘politically correct’ line and will be exploring concepts such as power and sexuality in a brutal manner.

While the narrator’s life stage is updated in each chapter, the book favours ideas, and plot is limited to what is relevant to the ‘conversation’. In a chapter situated in an art installation, the narrator and her friend question who has the ability to make art, and how the meaning changes as creator/object change. Again, gender and power are featured, tying into the narrator’s friend’s recent breakup.

Topics of Conversation has been compared to Sally Rooney’s novels, though Rooney’s work is plot-driven to a greater extent. Overall, this novel is a meaty one for conversations among readers – while the narrator’s likeability will polarise readers, the ideas will propel conversation well into the night.