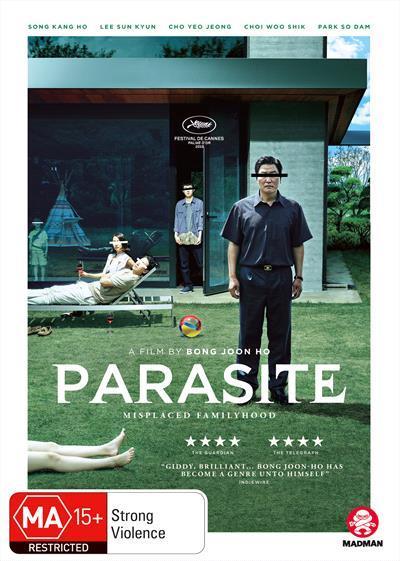 Ki-taek’s family of four is close, but all are unemployed and the future looks bleak. However, when the son, Ki-woo is recommended by a fellow university student friend for a well-paid tutoring job, hope spawns for a regular income.
Carrying the expectations of the family, Ki-woo arrives at the house of Mr. Park, the owner of a global IT firm, where he meets Yeon-kyo, the young lady of the house. The job interview is a success and soon Ki-woo begins work. But very soon, following this first meeting between the two families, an unstoppable string of mishaps lies in wait
Winner of the Palme dOr (Best Film award) at the Cannes Film Festival and the Sydney Film festival Official Competition (the first ever for a Korean film), this family tragicomedy is the latest masterpiece from Bong Joon-Ho, the director of The Host and Snowpiercer.
PARASITE confirms his position as one of the worlds most inventive and captivating filmmakers.

When Bong Joon-ho won the Palme d’Or at Cannes in 2019, Parasite was the ﬁrst South Korean ﬁlm ever awarded the festival’s top prize. Almost a year later, director Bong accomplished another series of ﬁrsts. At this year’s Oscars, Parasite was honoured not only with the Best International Feature Film award but became the ﬁrst non-English language ﬁlm to win Best Picture in the Academy’s ninety-two-year history. The accolades didn’t stop here. Bong also won Best Director, beating cinematic heavyweight – and one of his heroes – Martin Scorsese, and the award for Best Original Screenplay.

Truth be told, I think little of awards as a measure of a ﬁlm’s success or cultural value. But it’s impossible to deny the signiﬁcance of Parasite’s multiple wins; in this case, every prize is earned. Parasite is that rare thing – a genre-blending arthouse triumph with mainstream audience appeal. It’s smart and it’s fun plus it’s easy to see why a black comedy/thriller about class warfare has connected at a time when the gap between the haves and have-nots across the globe is wider than ever. In Parasite, the Kim family lives in poverty in a small semi-basement apartment, and industriously and hilariously ﬁnd a way to bridge that gap. They inﬁltrate the wealthy Park family’s home – not to do them harm, but simply to be able to do a day’s work. What follows will shock and stir, but above all entertain. But the less I tell you about Parasite’s plot the better. This is a ﬁlm where it really pays to be surprised.

Bong’s tragicomic capitalist critique is a ﬁlm where every detail counts. The Kim and Park families are mirror opposites, and importantly, so are their homes. Social inequality is built into the ﬁlm’s intelligent visual design; especially into every staircase and polished surface of the Park’s marvellous abode. By Parasite’s breathtaking, open ending, you’ll be questioning just who the bloodsuckers in this arrangement really are.

Blinded by the Light (DVD)