The Language of Secret Proof: Indigenous Truth and Representation 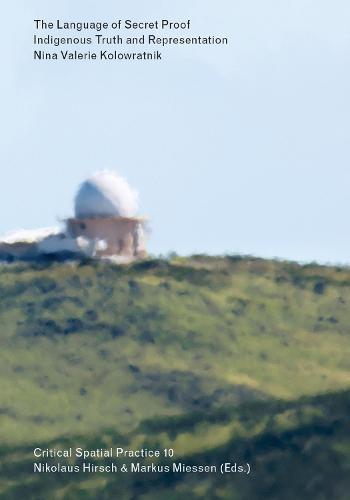 The Language of Secret Proof: Indigenous Truth and Representation

New spatial notational systems for protecting and regaining Indigenous lands in the United States.In The Language of Secret Proof, Nina Valerie Kolowratnik challenges the conditions under which Indigenous rights to protect and regain traditional lands are currently negotiated in United States legal frameworks. This tenth volume in the Critical Spatial Practice series responds to the urgent need for alternative modes of evidentiary production by introducing an innovative system of architectural drawing and notation. Kolowratnik focuses on the double bind in which Native Pueblo communities in the United States find themselves when they become involved in a legal effort to reclaim and protect ancestral lands; the process of producing evidence runs counter to their structural organization around oral history and cultural secrecy. The spatial notational systems developed by Kolowratnik with Hemish tribal members from northern New Mexico and presented in this volume are an attempt to produce evidentiary documentation that speaks Native truths while respecting demands on secrecy. These systems also attempt to instigate a dialogue where there currently is none, working to deconstruct the fixed opposition between secrecy and disclosure within Western legal systems.