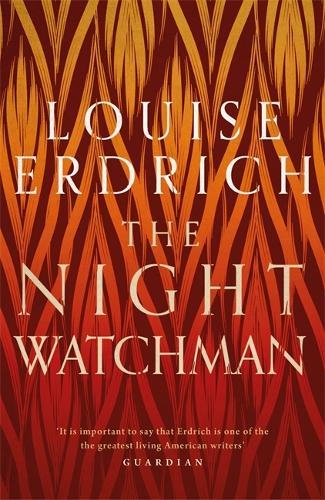 It is 1953. Thomas Wazhushk is the night watchman at the first factory to open near the Turtle Mountain Reservation in rural North Dakota. He is also a prominent Chippewa Council member, trying to understand a new bill that is soon to be put before Congress. The US Government calls it an ‘emancipation’ bill; but it isn’t about freedom - it threatens the rights of Native Americans to their land, their very identity. How can he fight this betrayal?

Unlike most of the girls on the reservation, Pixie - ‘Patrice’ - Paranteau has no desire to wear herself down on a husband and kids. She works at the factory, earning barely enough to support her mother and brother, let alone her alcoholic father who sometimes returns home to bully her for money. But Patrice needs every penny to get if she’s ever going to get to Minnesota to find her missing sister Vera.
In The Night Watchman multi-award winning author Louise Erdrich weaves together a story of past and future generations, of preservation and progress. She grapples with the worst and best impulses of human nature, illuminating the loves and lives, desires and ambitions of her characters with compassion, wit and intelligence.

Native American author Louise Erdrich’s new novel, set amongst the inhabitants of the Turtle Mountain Reservation, is a welldrawn and sprawling portrait of a community in peril. Based in part on Erdrich’s grandfather’s own efforts in the mid1950s to stop the US government from further taking away Native American land, The Night Watchman tells the story of Thomas Wazhushk’s efforts to fight a bill being put forward by the government to ‘emancipate’ Native Americans from their reservations.

While this setup on paper sounds high stakes and, admittedly, a little dry, The Night Watchman is both kaleidoscopic and languid in its progress. ‘This was again the sort of feeling and thinking that could only be described in Chippewa,’ Erdrich writes at one point, ‘where the strangeness was also humorous and the danger surrounding this sort of situation was of the sort you might laugh at…’

As well as Thomas instigating support throughout the community, the novel also follows a young woman called Patrice on the search in the city for her missing sister, the boxing coach who loves her, one of his younger boxers named Wood Mountain and, additionally, several of the intricate backstories of many of the other Chippewa from the Turtle Mountain reservation. At one point there is a ghost; an owl arrives, signalling death; a character is employed to dance in a water tank in a city bar, dressed as a mythical blue ox.

While this multi-faceted approach runs the risk of being frustrating for readers, the ease with which Erdrich unfurls the story makes The Night Watchman a true pleasure to read, and her vivid descriptions and true affection for her characters is highly infectious, ensuring this novel will be one of the year’s best.