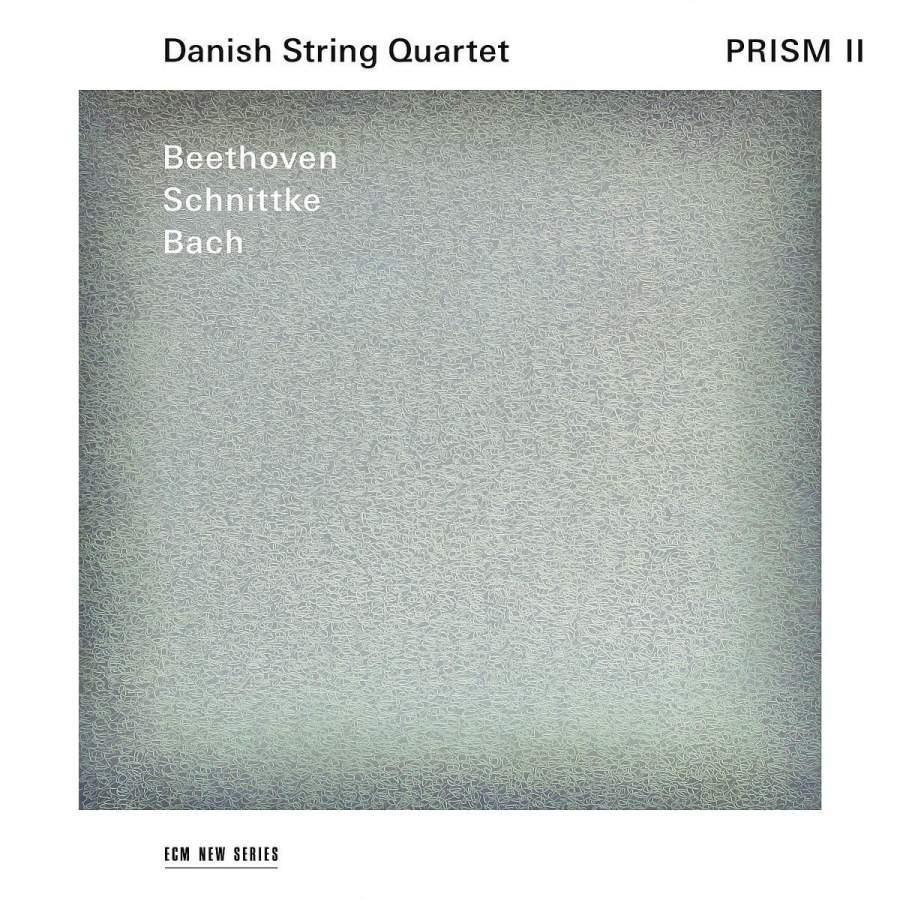 Each of the albums in the Danish String Quartet’s ongoing Prism project links one of the five late Beethoven quartets with a Bach fugue and a kindred-spirit work by a later master. Released last year, the Grammy-nominated first instalment of the series earned wide acclaim. The second volume of the series begins with the Fugue in B minor, BWV 869, which completes J.S. Bach’s Well-Tempered Clavier, Book I (in an arrangement by Viennese composer Emanuel Aloys Förster, an elder contemporary of Beethoven). As Prism I included a quartet by Shostakovich, Prism II features one Alfred Schnittke. Characteristically, Schnittke’s String Quartet No. 3 of 1983 echoes with the sound of ghosts, from the late 16 thcentury (Orlando Lassus and his Stabat Mater) to the mid-20 th century (Shostakovich and his musical monogram of DSCH - which, as Paul Griffiths points out in his booklet essay, can be sensed as a transposition of the first four notes of the theme from Beethoven’s titanic “Grosse Fugue”). The original version of Beethoven’s String Quartet No. 13 in B-flat Major, Op. 130, included the “Grosse Fugue” as its final movement - which is how the DSQ presents the piece on Prism II.
In a prefatory note to the five-album Prism series, DSQ violist Asbjørn Nørgaard explains that even with the groundbreaking, future-minded aspects of the late Beethoven quartets, “this music is far from being disconnected from the past. Rather, Beethoven was focusing deeply on tradition and the ‘old days' during the last days of his life, and was especially obsessed with Bach’s Well-Tempered Clavier, from which he derived many of the melodic motifs in his five late quartets… What Beethoven did with this tradition, however, was mind-blowing. His late quartets were so extreme and brilliant that they changed the game. Every composer after Beethoven had to consider these works and somehow figure out how to carry the torch. Beethoven had taken a fundamentally linear development from Bach and exploded everything into myriad colors, directions and opportunities - much in the same way a prism splits a beam of light.”
Beethoven completed his six-movement Op. 130 in 1826. As the biggest of his late quartets, the Op. 130 ranges from the comic to the cosmic, from Haydnesque scherzo to Mahlerian love song and beyond. After the work’s initial performance, Beethoven’s publisher persuaded him to substitute a shorter, lighter-toned finale for the 15-minute-plus “Grosse Fugue,” its length and level of dissonance considered too much for audiences of the time. The “Grosse Fugue” was first published as a standalone work, as Op. 133. Performers today, like the DSQ, often favor the composer’s original intentions, using the “Grosse Fugue” as the quartet’s finale. Encapsulating Schnittke’s polystylistic manner, his milestone String Quartet No. 3 takes the kaleidoscopic aspects of Beethoven’s Op. 130 into the late 20 th century. With the work’s opening quotation of Lassus, the DSQ evokes a Renaissance consort of viols before digging into keening dissonances with a full, modern tone. Across the work, Beethoven and Shostakovich, waltz and lament, eras and emotions “twist and turn” in Griffiths' phrase, the music feeling unsettled, otherworldly and, ultimately, timeless.
Prism II comes as the DSQ embarks on a tour with concerts on both sides of the Atlantic, from Germany, Denmark and Belgium in September-October to a full, five-concert Prism cycle for California’s La Jolla Music Society in November. Referencing the links between Bach, Beethoven and the modernists who came after them, Nørgaard says: “The important thing to us is that these connections be experienced widely on an intuitive level. We hope the listener will join us in wonder at these beams of music that travel all the way from Bach through Beethoven as far as our own times.”
$26.99Add to basket ›